Looks like I accidentally forgot to do a Gil Kane punch yesterday, so I'll be sure to put one up tomorrow. In the meantime, I'm going to stay on track with Blackhawk Wingsdays, today's installment featuring the second story from Blackhawk 196: "Five Broken Guns!" 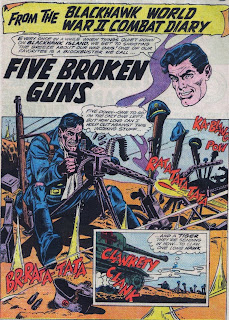 One of the things I love about this era of Blackhawk comics is when the series would occasionally remind readers that this used to be a slam-bang war comic by digging back into the "World War II Combat Diary." This particular story, written by France Herron and drawn by Jack Sparling and Chuck Cuidera, is no exception.

The Blackhawks parachute into Nazi-occupied France in order to destroy a strategically important bridge, but the second they land, they come under unexpected Nazi fire.

Man, I love the dialogue in this story.

The boys are pinned down, and they need to come up with a plan in order to save their own bacon and complete the mission. Blackhawk's solution: pretend that Andre and Stan were killed in a grenade blast, allowing the duo to flank the Nazis and destroy their Tiger Tank that's on its way. 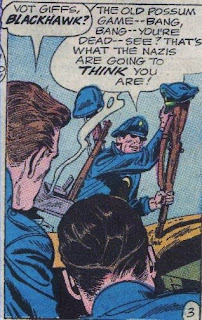 The Nazis increase the heat by calling in a mortar attack on the Blackhawks' trench, and realizing the team can't hold this position for long, Blackhawk extends his ruse by pretending that Chuck, Olaf, and Hendrickson are dead, too. The three are then sent to join their teammates in the tank attack. 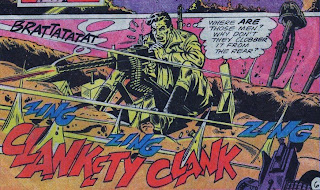 However, the tank keeps coming, and Blackhawk is having more and more difficulty holding his position. So, in typical Blackhawk style, the man takes matters into his own hands. 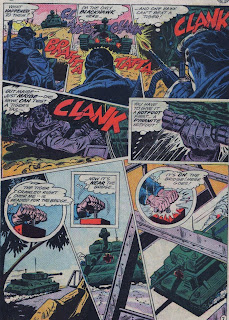 Just to be clear on what happens here: Blackhawk slides under the tank, attaches the dynamite, and then single-handedly blows up both the tank and the bridge--a job Blackhawk had previously sent 5 men to do. This is a pretty awesome sequence right here.

And where were the other Blackhawks while all this was going down? 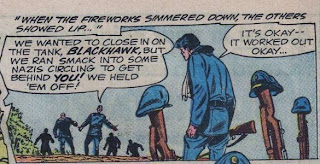 A likely story. As usual, the rest of the team drops the ball and leaves Blackhawk to do all the dirty work.
Posted by Dr. K at 9:12 AM

Yep, the other Blackhawks were no doubt boozing it up somewhere. :-)

If the Blackhawks are aviators, why parachute at all? Why not just drop bombs on the bridge from above?

That's Sparling/Cuidera? Who knew? Sure did a good job imitating the usual Dillin/Cuidera.