The Gil Kane Punch of the Week 30: What's Batman Got that I Haven't?

The Gil Kane Punch took last week off while I was compiling the year-end/decade-end lists (and I still have one more list to do). So, to make up for lost time, here's a special super-sized edition of the Gil Kane Punch of the Week!

In "Peril of the Powerless Green Lantern!" from Green Lantern 58 (Jan. 1968, reprinted in Showcase Presents Green Lantern Vol. 3)-- written by Gardner Fox, pencilled by Gil Kane, and inked by Sid Greene--the Guardians of the Universe remove Hal Jordan's power ring and force him to take a vacation after some erratic emotional behavior threatens his role as a galactic law enforcement officer. The absence of a power ring, however, does not stop Hal from finding some action: 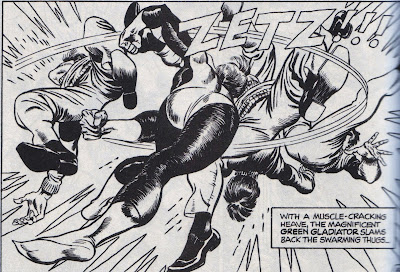 While confronting one gang, the thugs quickly recognize that GL is sans power ring, so they all gang up on them, but Hal takes four of them down with one "muscle-cracking heave," to quote Gardner Fox's purple prose.

With this next move, though, I don't even know how it would work physically:

You would have to be extra bendy to simultaneously grab two guys by the head and kick them in the guts. But there it is.

Missing his normal powers, GL has to rely on his basic fighting skills and brute strength, causing him to channel Batman. While asking the eternal question, WWBD?, Hal turns introspective and starts to make some broader comparisons between himself and the Dark Knight: 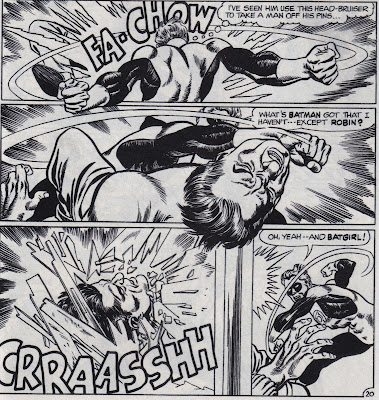 I also want to point out, earlier in this story, Hal spends a page and a half beating the shit out of a bear. I'm going to be spending some more time with Green Lantern 58 over the coming weeks, when I'll be sure to share the awesome experience of the Gil Kane Bear Punch!
Posted by Dr. K at 9:54 PM

Knowing Hal, straight after this fight he whipped out his Justice League communicator and asked Bruce for Babs' number.

Oh Hal. Your ego is stupendous, but danged if you can't back it up.