After seeing Quentin Tarantino and Robert Rodriguez's Grindhouse, I've tried to expand my knowledge of grindhouse films in general. And having grown up near a drive-in theater, I already had a strong familiarity with low-budget horror, motorcycle, and car-chase movies. My most recent foray into this genre is the film Cycle Savages (1969).

Now, on the surface, Cycle Savages should be the greatest movie every made. After all, the plot involves Bruce Dern as Keeg, the leader of a motorcyle gang/white slavery racket, who becomes obsessed with crushing the hands of an artist (Chris Robinson) who has been sketching the gang. There is no reason why this movies shouldn't be great!

And to make it even greater, the movie features Casey Kasem as a pimp. That's right: the voice of Shaggy, Robin, and Alexander Cabot III plays a P.I.M.P. When I first read about that brilliant bit of casting, my hopes for this film skyrocketed. Let's take a look at Pimp-Shaggy himself: 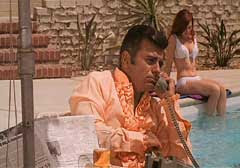 Casey, you are definitely not making pimping any easier in that shirt. What kind of melon would best describe that color? Cantaloupe?

Unfortunately, this is the first of many signs that the movie will ultimately fail to live up to its potential: Kasem only appears in it for about 30 seconds. And while we do get to hear the voice of Shaggy order up "a girl with a little class" from Keeg, we don't get to see Kasem pimp-slap someone for making him talk about a fucking dog dying after coming out of an up tempo goddamn record. At least, that's what I was hoping to see.

The rest of the movie involves Bruce Dern going ape-shit crazy (which is what he tended to do best while playing this same character in movie after movie during this period) about crushing the artist's hands, while the artist falls in love with a girl (Melody Patterson, best known as Wrangler Jane on F-Troop) who poses nude for him, but secretly works for Keeg's gang.

Bruce Dern always scared the crap out of my when I was a kid, and this movie helps demonstrate why that was. His performances--with his cracking, high-pitched voice--are wild and unpredictable, with violence always pushing at the surface and occasionally exploding. When he pulls a straight razor 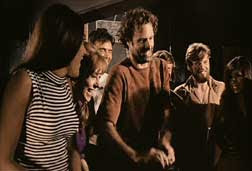 on Chris Robinson, you know he will use it, but you don't know how bad the damage will be, and the scene becomes unbearably tense. In the great reference book, Cult Movie Stars, Danny Peary describes Dern's early performances: "Often his characters are overly serious and sensitive about something trivial. Their worlds are limited and they are obsessed with one thing." In that sense, this is the quintessential Dern performance, as he becomes so obsessed with the artist's hands that he proceeds to neglect both his business and his women.

Cycle Savages ultimately degenerates to a point that makes it difficult to recommend. The film uses a truly tasteless gang rape scene to contrast the more pure "love-making" engaged in by the artist and the girl. What you see at work here is the intense misogyny of such exploitation films that Tarantino is playing with in Death Proof--in Cycle Savages, we are essentially asked to care more about the artist's hands than the girl who is drugged and raped by Keeg's gang. The film is also marred by sloppy editing, inexpressive acting by everyone but Dern, and nonsensical plot developments, including a ridiculously cheap and unsatisfying conclusion (though the artist's hands remain intact). So, once you get past Pimp-Shaggy, the movie devolves into total crap.

Perhaps it can be saved by a little Lolcats: 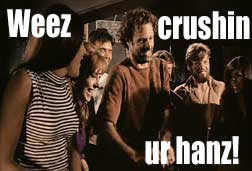 No, that doesn't help, either.

(All pictures from DVD Drive-In.)