From the people who brought you "Super-Heroes Battle Super-Gorillas," "War Against the Giants," "Super-Heroes' War Against the Monsters," and "Earth Shattering Disasters," the 100-Page Super Spectacular is proud to present tonight's featured comic, DC Special 27 (May 1977): 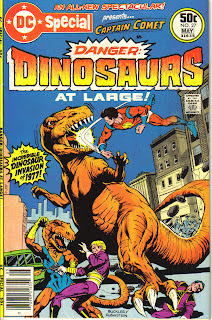 Starring Captain Comet! Tommy Tomorrow! Chronos! And Whatever Other Characters DC Wasn't Using at the Time!

Man, I just have to say it: I could watch Captain Comet punch a T-Rex in the tongue all day. I appreciate the simple pleasures in life that way.

And I also appreciate the irony of the cover: Captain Comet--"a mutant born 100,000 years ahead of his time" (as he never fails to tell everyone in this story)--lays out the most dominant creature of 100,000,000 BC (At least that's the year cited in the comic. And since comics have never lied to me before, I'm prepared to defer to their greater knowledge of such things.).

I think the appeal of this comic can be summed up in one question, provided by editor Paul Levitz and writer Bob Rozakis:

In this story, a comet or meteroid or something buzzes the Justice League satellite in 1977, while Captain Comet is paying a visit to Hawkman. The comet, however, happens to be traveling through time, and when it reaches the year 2056, it pulls with it Tommy Tomorrow's spaceship, which happens to be on a rescue mission to Vega-IV, where a "space-fever" epidemic has broken out.

True fact: by the year 2056, humankind will have run out of names for diseases. The solution: just put the prefix "space-" before the names of already existing diseases, like "space-fever," "space-cancer," "space-herpes," "space-burning-sensation-when-I-urinate."

Anyway, Tommy Tomorrow and his crew are dragged all the way back to 100,000,000 BC, where the comet/meteor finally crashes to Earth. Immediately upon arrival in this prehistoric era, their ship comes under attack by pterodactyls. This is a bad idea for the pterodactyls: 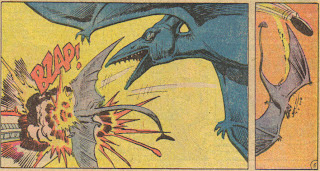 That's right: when the pterodactyl tried to attack the spaceship, its head disintegrated! No wonder they're extinct.

Though Tommy makes a good faith effort to avoid killing dinosaurs, this doesn't work out, and he eventually just starts wasting them left and right: 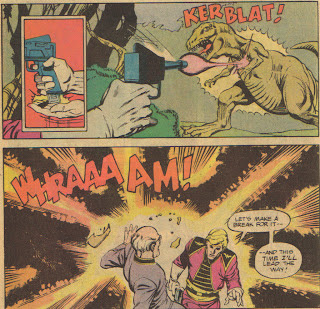 Clearly, Tommy Tomorrow never read that one Ray Bradbury story where the time traveler goes hunting dinosaurs and accidentally steps on an insect, causing cataclysmic changes to human history. I had to read that story in 8th grade, so I guess that the decline we're currently seeing in the American educational system continues to slide in 2056.

Also, Tommy obviously didn't receive the same advice that Homor Simpson received from his father on his wedding night: "If you ever travel back in time, don't step on anything, because even the tiniest change can alter the future in ways you can't imagine."

Meanwhile, a t-rex comes across the meteor, with hilarious results: 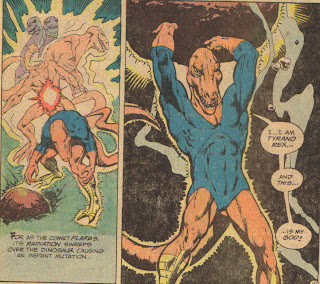 Man, am I glad that the meteor evolved that t-rex a nice blue unitard and some yellow boots--it saves me from seeing "tyrano erectus," if you know what I mean.

Upon gaining sentience, "Tyrano Rex" begins to worship as a god the meteor that caused his evolution, which makes sense--I'd worship a meteor if it gave me a six-pack and abs like that.

At this point in the story, writer Bob Rozakis has done something quite brilliant: he has solved the evolution vs. religion debate that, thirty years later, is still tearing this country apart. Evolution and religion, he is saying, can and should co-exist, and we should really be worshipping the space-meteor that caused evolution to occur in the first place.

So, Tyrano Rex immediately begins to build a shrine and establish a ritualistic dance ceremony in honor of his deity. As the story progresses, Tommy Tomorrow kills a few dozen more dinosaurs before stealing the comet and returning to the 21st century. However, Tyrano Rex manages to stow away on Tommy's ship, causing Tommy to make a detour to 1977, where Captain Comet is currently fighting Chronos. There is really not much more to say here: the comet is destroyed, Tyrano Rex returns to his pre-evolved state before Captain Comet launches him into Chronos's time portal, and Superman comes in to help Tommy Tomorrow return to the future.

If you're like me, I know you have one lingering question, though: how did such a masterpiece come about?

For this, thankfully, we do have an answer, in the form of a text-page by Rozakis: 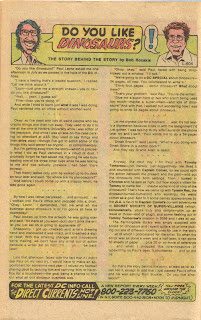 I love these text pages that ran in 70s DC comics, especially the ones written by Bob Rozakis. As a comic fan who got his start in comics from "letter-hacking," or writing frequent fan letters to DC comics, he inherently understands exactly what comic readers want in these pages. Here, he reveals some insights into how top-level editorial decisions were made at DC in 1977: 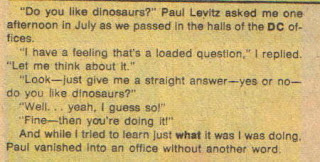 And I firmly believe decisions are being made this way at DC to this day.

The old guy in the panel with Tommy Tomorrow... well, he looks a bit like Julie Schwarz.

Funny, I always thought Julie was more of a gorilla guy. :)

That blew my mind and made me laugh so hard milk shot out of my nose, and I wasn't drinking milk at the time.

Only one comment? If Chris Sims had run this exact post, heads would be exploding all over the comicswebscape. You're easily as funny and creative, and lack only Sims' comic-blog-reading demographic, it seems.

Chance--thanks for the comment. Chris is a friend of mine, and we both share a similar sense of humor, so your comparison is a nice compliment.

Oh that is it. This ish is now on like Michelle Kwan!

Of all the comics I had when I was a kid that I still wish I had (I have lots, but maybe a box or two disappeared somewhere in my folks' merciless care before I could reclaim them as a maladjusted adult), this comic is pretty much top of the list. Great to see it again.