It is common, in the comics blogosphere, to make fun of Jimmy Olsen, especially in his Silver and Bronze Age appeareances. Bloggers such as Chris Sims and Jake Bell have turned such ridicule into an artform. So, I hope I'm not stepping on any proprietary fingers by jumping in on this as well, but I do have a lot of material for this in my comic collection.
The reason for the popularity of Jimmy Olsen in the blogosphere is simple: Jimmy Olsen makes it so easy. 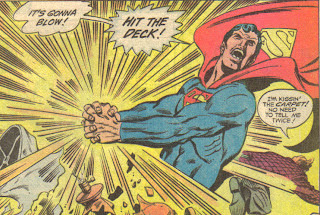 Uh, Jimmy, I think that phrase has different, ummm, connotations. And, I might add, Superman has provided a perfectly suitable euphemism for diving down to the floor in "Hit the deck," so there is no need to go where you went.

Then, on the next page, one can't help but think that Jimmy knows exactly what he's saying: 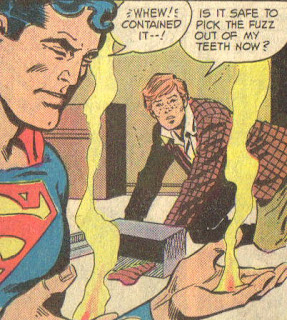 These images are from Action Comics 550 (December 1982), in a story titled "The Day the Earth Exploded."

This is clearly a fill-in issue, as the story features a never-seen-since villain named "The Exploder," who flies around throwing bombs at things, like airplanes, Superman, and Australia:

Naming a villain "The Exploder" is the essence of "phoning it in." That's a name you come up with in the early stages of the brainstorming process to get the ball rolling--it's not the name you settle on.

It turns out that the villain is part of an alien race who visited earth before the continents separated into their current positions, and he is looking for a piece to a puzzle that was planted on Pangaea at the time. So, the subcontinental explosions that the Exploder sets off are intended to put the continents back together, like a giant puzzle.

Who is responsible for this fill-in? 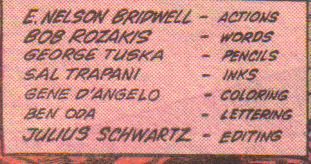 The writing credits are ambiguous here, as I'm not exactly sure what it means to be responsible for the "actions." However, I can imagine the origin of this issue came about something like this: Julius Schwartz looks out his door to see who is around; spotting E. Nelson Bridwell and Bob Rozakis, Julie sends them out to get lunch, with a command to come back with a plot for Superman and a turkey on rye.
Posted by Dr. K at 1:22 PM