One of the things I look forward to during the long holiday breaks that college teachers get is the opportunity to read stuff that either isn't on my syllabus or isn't being considered for a future class. Lately, I've been especially enjoying stuff that comes from the Hard Case Crime imprint, as was the case with the Mickey Spillane novel I recently reviewed. I've been impressed with the quality of the novels I've read from this publisher (though I was disappointed with Stephen King's contribution, The Colorado Kid), and I appreciate the way they have embraced the pulp fiction format and aesthetic: cheap, fast-paced thrillers (featuring lurid covers) that can be read in one or two sittings.

So, when I was on my recent trip to Wisconsin, I picked up a couple of the new volumes for the long drive. In addition to Spillane's Dead Street, I also grabbed Max Allen Collins's Deadly Beloved, the first novel featuring Ms. Tree, the comic book private detective that Collins created along with artist Terry Beatty in the early 80s. 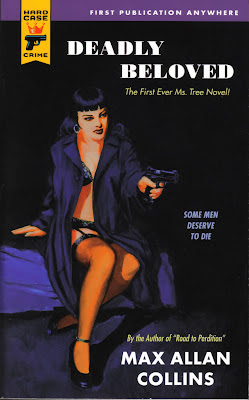 I had scant experience reading the Ms. Tree comic--I picked up a few issues of the quarterly series that DC put out in the early 90s--but that inexperience did not hinder me from enjoying this novel. Collins "reboots" the character's origin in Deadly Beloved, updating the character for a more contemporary world.

Ms. Tree is Michael Tree, a former Chicago police officer turned private detective, who is the widow of a former Chicago police detective turned PI also named Michael Tree (and I thought it was confusing living in a house with two Doctors K). Her husband is murdered on their wedding night, and Ms. Tree then inherits his fledgling detective agency. The novel takes place a year after her husband's murder, when Ms. Tree discovers that the killer may have been set up by a mysterious mob enforcer known as "The Event Planner." The Event Planner is a kind of mythical figure who some police believe sets up various hits by manipulating other people into committing murder so he never pulls the trigger. Ms. Tree's police friend, Lt. Rafe Valer, is ridiculed by his colleagues for his theory about the Event Planner, but evidence soon mounts during the investigation of a schizophrenic wife's murder of her cheating husband to make the theory a likely reality.

Collins chooses an interesting narrative approach to this novel: the story is framed by a therapy session in which Ms. Tree tells the events of the investigation to her psychiatrist, Dr. Cassel. A similar conceit is often used on crime shows like Law and Order or CSI, but it works here as well, though the reader is meant to imagine that this is a particularly long therapy session.

As Collins acknowledges in his afterword, some of the character names in this novel are symbolically a bit too on-the-nose. Ms. Tree actually calls attention to her name, demanding that people call her "Ms." instead of "Mrs." and pointing out that she sees the name as a selling point for her detective agency. Other characters have names that also highlight their personality or morality: Rafe Valer, the Muerta crime family, and the groan-worthy Chic Steele, to name a few. This type of symbolic naming is certainly a holdover from the story's comic book origins. Also, Collins, in addition to being a prolific mystery writer, also wrote several comic series, including the Dick Tracy comic strip, a year or so of Batman stories in the 80s, and Wild Dog, a character he also created with his Ms. Tree collaborator, Terry Beatty.

Ms. Tree also has to deal with considerable animosity directed at her gender, as she has built her success in what is largely a man's world. In his afterword, Collins addresses the fact that there are more fictional female PIs now then there were in the early 80s, and a lot of the gender bias Ms. Tree receives does seem a bit dated. Collins does give his female protagonist enough amusingly witty retorts to the sexism that she faces, and her tough, often crude language is effective at putting her adversaries off-balance, though one shouldn't expect this novel to break new ground on gender equality.

This is not to say that the novel is overly simplistic. Collins also infuses the novel with enough noir overtones to give the plot some moral complexity. This is especially true in the intriguing concept of the Event Planner, who is able to manipulate relatively normal people into committing murder through an intimate awareness of what buttons to push. However, the novel does lose some credibility in the end by not playing fair with the audience regarding this particular mystery: we don't get much information on his or her identity, nor do we get a viable candidate for the role, until the very end of the novel. Still, the road leading up to that conclusion is entertaining and engaging enough to minimize the problems there.

Collins's afterword points to potential future developments for the Ms. Tree character, including a possible TV series. While I hope that works out, I also hope that Collins continues to produce more Ms. Tree novels for the Hard Case Crime imprint. The main character is particularly fun, with a versatility that can translate into different media.
Posted by Dr. K at 11:16 AM

I'll say this right now: A Hard Case Crime novel starring Wild Dog would be the greatest work of literary fiction ever printed.