Cloverfield Breaks Dr. K; The Other Dr. K LOVES IT!

I'd been looking forward to seeing Cloverfield as a part of the birthday weekend celebration ever since I saw the original teaser attached to Transformers.

That being said, I can summarize my review of the film in three words:

As someone who can't play first-person shooter games without suffering motion sickness, I was worried about the film's use of a handheld camera for the entire running time. However, I didn't quite expect the experience to be so overwhelming. I started to get queasy very early in the movie, even before the monster attacks, and the rest of the movie was spent intermittently looking away from the screen for long periods, turning back only when it was clear that something important was happening or the camera was sitting still. I'm guessing that I probably only watched a little over half of the movie.

I was also concerned that the film's short running length--75 minutes--would seem like a rip off. But at the 45 minute mark, I was praying that the whole experience would be over. Then, at about the 50 minute point, the couple next to me just got up and left, the wife a little unsteady on her feet. Luckily, they left behind their popcorn tub, and I eyed it as a possible recepticle for the vomit that was surely coming. So, I spent the last half of the movie trying to determine the best exit strategy.

By the time the movie finally ended, I had only thrown up twice inside my mouth, but my nausea was getting much worse.

But, after the movie, we made it home, I took off my coat and shoes, walked into the bathroom, and threw up. Then I had to lie down for a couple of hours.

So, I'm turning things over to the Other Dr. K, who actually watched the whole movie, to give you a more substantive review. Meanwhile, I'm going to lie down some more. 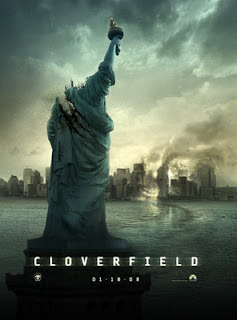 OK--This is the Other Dr. K taking over for Dr. K, who had to go back to bed (he's looking a little pale still).

In short, Cloverfield is AWESOME!!! Think of it this way: something huge and destructive attacks your city and starts turning everything into rubble. What would you do? No, really, what would you do?!?

That's the question that Cloverfield poses to viewers. After you meet a group of Manhattan party-goers who must face the reality that NYC is suddenly and without explanation being destroyed, you--transported through the hand-held camera movements--must join them as you run through the city, trying to get out of "its" path. The hand-held camera movement--which Dr. K found so nauseating--is actually a brilliant feature of this film, visually providing viewers with the sense of chaos, fear, and despair that the characters in the film experience.

I don't want to provide any spoilers for you, but I definitely encourage you to see it. I found it a very compelling, digital-age narrative that transforms the monster-movie genre.

One tip for those who might be prone to travel sickness: Try focusing on the center of the screen and let your peripheral vision take over. Before seeing this film, I thought that I might be the one with my head in the trashcan, but once I started focusing on the middle of the screen, I was fine.
Posted by Dr. K at 3:39 PM

Seems this was a common theme - I've heard and read about a bunch of other people who got sick from the movie, and had to get up and walk out.

Val got sick. She didn't throw up. But she made me drive home after the movie.

My theory is that watching this movie is much like looking at a 3D movie or a 3D image on paper. It's like when you draw a cube on a paper... some people see a cube when they look at it, but a small percenetage of the people only se a bunch of lines, much like when a monkey cant tell that his reflection on a mirror is not another monkey... thats probably because their brains are still very primitive or they lack something that allows the rest of us to grasp abstract concepts and ideas. I really dont understand how someone can get sick when ther is no motion to infuence the motion sickness. To make a long story short, if you get motion sicknes from watching something on TV or Theater then your'e a fucking idiot.

That's a very interesting theory. I look forward to reading about your research when it gets published.

Be on the lookout for it. I will title it "An inquiry into the psyche of the fucking idiot", in your honor.

So is it possible to evolve past both motion sickness and being a dick on the Internet, or, as the evidence would indicate, are the two mutually exclusive?

Hopefully Anonymous will follow up that paper with "A Treatise on the Non-Traditional Usage, or Lack Thereof, of Apostrophes."

You linked to an article about eugenics in your discussion of motion sickness in theaters.

You cannot conceive for a second that maybe you just don't fully understand the science, so instead you decide those who get/claim to get motion sickness are... part of the mongrel race.

If "your'e" the master race, sir, I want no fucking part of it.

I get motion sickness from video, but to contradict your theory, I'm incredibly goddamn brilliant.