Tonight, at the Other Dr. K's school, we got to see Mitt Romney, hot off his victory in Michigan. 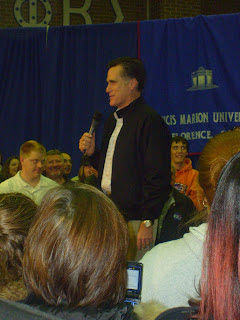 The event was supposed to start at 4:30, but as tends to be par for the course with these things, the show started more than 45 minutes late.

Because of Romney's victory yesterday, the media were in full force, and the candidate's delay was attributed to a last minute CNN interview with Wolf Blitzer.

I was surprised how many people were there that I recognized from the Edwards event on Sunday. I guess that a lot of them are going to these things for the same reason I am, which is simply to see the different candidates.

Probably because of the media coverage, the Romney campaign had a pretty elaborate set-up, dominated by two big signs. 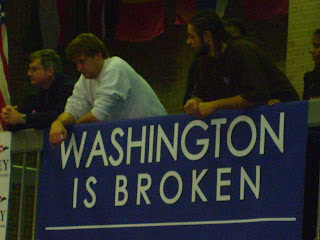 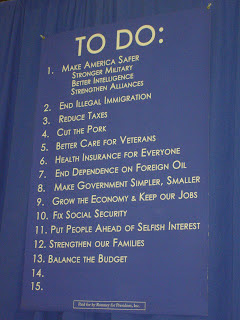 I thought this "To Do" list was kind of funny--you could pretty much generically apply this list to any candidate (though Romney and other Republicans use "Strengthen our Families" as a euphemism for something else). Personally, I prefer pulled pork over cut pork, but that just may be a Southern thing.

As we were waiting for the event to start, one of the Other Dr. K's students came to her with an emergency: they needed some different music to pipe in through the speakers during the delay. The Other Dr. K happened to have her iPod with, so she and the student went back stage to set things up.

She then had to make some hard choices. She couldn't just hit "Shuffle," as the possibility of the iPod landing on some hardcore gangsta shit was too likely (This, by the way, is not true. But she does have a lot of Kanye West that some attendees might find "inappropriate".). She also didn't want to give Romney her U2, and, really, who needs to see another politician enter a rally to a U2 song?

Instead, she chose her Coldplay mix, which was innocuous and inoffensive enough for the event and crappy enough that no one would really care about associating their music with a Republican presidential candidate.

I started to imagine what I would do if it were my iPod used for this event. I would probably pop in my Clash mix, specifically focusing on London Calling. I think "Clampdown," "Guns of Brixton" ("When they kick at your front door, how're you gonna come? With your hands on your head or on the trigger of your gun?"), and "Death or Glory" all would be tellingly appropriate here.

When Romney finally arrived, he was led in and introduced by South Carolina Senator Jim DeMint. 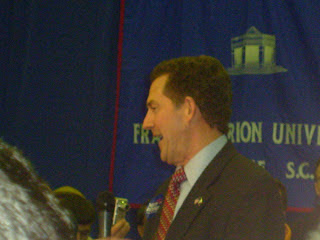 Romney also brought with him his youngest son, daughter-in-law, and their 20-month old toddler. And, in typical fashion, he pimped out that baby right away, having the kid shake hands with the crowd. 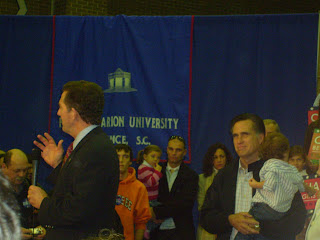 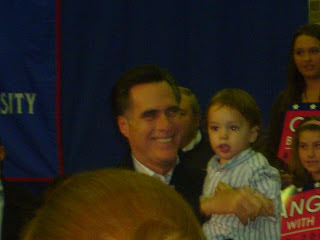 Romney's speech was heavily laden with personal stories and anecdotes. Because he doesn't have the compelling rags to riches story that Edwards has, he has to rely more on his father's life for that narrative. He began telling a story about how his father was born in Mexico. But then, to show that he's still tough on immigration, he explained that his grandparents were, in fact, Americans (maybe they were just there for a quick trip to interview some landscapers).

In an interesting move, he made no real references to his Republican opponents, but he did go on the attack against Democrats, which seems to indicate that he's changing his rhetoric to sound like he's the nominee running a national campaign. For example, when he tried to explain his "Health Insurance for Everyone" plan, he said more about how it wasn't like Hillary Clinton's plan than he did about what the plan actually was.
. 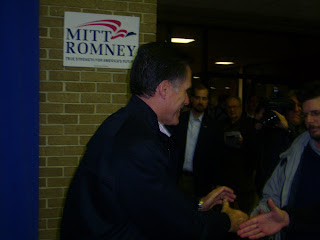 I did shake the candidate's hand on his way out, so now that's two handshakes I've received from presidential candidates so far. 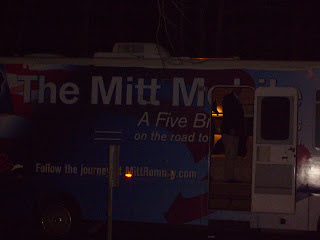 Here's one last shot of Romney's campaign bus, "The Mitt Mobile." I point this out only because, coincidentally, that was also the nickname I gave my '72 Fury in college. Go figure.

The only other Republican I might get a chance to see this week is John McCain, who will be in town Friday morning. Ron Paul was scheduled to be here Friday afternoon, but he has since cancelled the event. Once Nevada is over, we'll get hit with the Democrats for the following week.
Posted by Dr. K at 10:30 PM

Um, U2 is AWESOME and Coldplay is not crappy. You have sucky musical taste, Dr. K!

Signed,
The Other Dr. K

I love Coldplay, but have to respectably disagree about U2. Bono's a good songwriter, and that's about it.