Dr. K on the Campaign Trail

As a politics junky, I have to say that one of the benefits of living in South Carolina is that every four years, we get more than enough opportunities for face time with the presidential candidates. Lately, however, I've been one step behind in getting such opportunities, as I only hear about the local events after the fact.

For example, on Wednesday, I missed the opportunity to see Fred Thompson at a local diner, and I was really hoping to get the chance to have him autograph my copy of Die Hard 2: Die Harder.

So, this weekend the Other Dr. K and I decided to get proactive about this and find out when the various candidates were coming to our area. Helpfully, local newspaper websites have started to list candidate appearances in the state.

Not that any of that research mattered, as yesterday, we got several phone calls from the Edwards campaign, inviting us to a campaign stop at a local barbecue restaurant today.

We got to the restaurant about 45 minutes before the event was supposed to start, and the place was already packed. Turns out that the first 100 people who showed up for the event got a free meal. This information was not communicated to me in any of my contacts with the Edwards campaign, however. As anyone who knows me can attest, I don't pass up opportunities for free food, and there are few things I love more than barbecue.

Campaign staffers asked us and a few of our friends, some of whom are political science professors, if we would be interested in going outside to meet the bus, and we agreed to do it. This turned out to be a good decision because we not only got good handshake opportunities with the candidate, but we also got some good camera time with the local news and C-SPAN. Plus, my camera takes better pictures outside than inside. 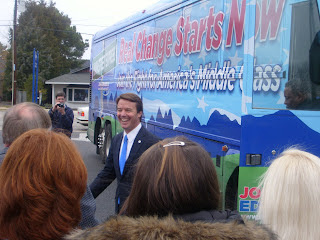 I especially like this picture, not only because it shows what a darn handsome man John Edwards is, but also because the bus's open door obscures the first two letters of the last word in Edwards's campaign slogan, and I have the sense of humor of a twelve-year-old.

I would totally vote for a candidate who fought for America's middle ass. 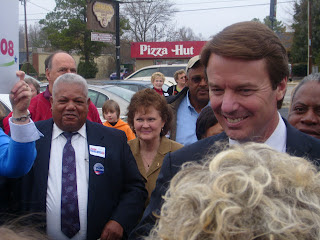 We both got to shake the candidate's hand as he entered the restaurant, and then we went inside to hear the speech. 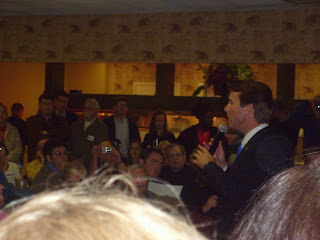 This particular campaign speech was not new to us--it mainly adhered to the same speech he gave following the Iowa caucuses, with references to individuals who have had problems with the current health care system, but also including his "born in South Carolina" spiel as well. It's a good speech, and despite the fact that he must be giving it a couple of times a day, he does so with sincerity and conviction.

One thing that struck me about the speech, however, is how it began, with a series of positive statements about Barack Obama. Several of us, including the poli-sci profs, wondered if this could be an early sign of Edwards jockeying for the VP spot on an Obama ticket.

Following the speech, we went back outside, hoping for an opportunity to get a picture with Edwards. As we waited, I spotted Joe Trippi, Edwards's campaign advisor and former advisor to Howard Dean, standing by the bus. 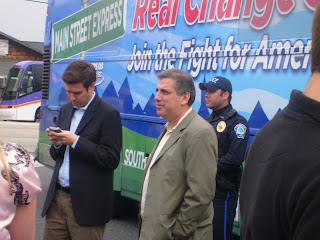 I approached Trippi and asked him how things were going. He shrugged and said, "Oh, okay"--not the kind of response that exactly inspires confidence. I then asked if I could get a picture with him, explaining that I really admired the work he did on the Howard Dean campaign. 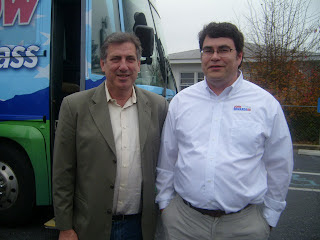 Though he was a good sport about the picture, his reaction could best be described as nonplussed, or perhaps it was just the humility of someone who is used to being "the man behind the man..."

This picture will also be useful for spotting me in the crowd if you happen to be watching C-SPAN's coverage of the event.

That ended up being the best I would be able to get, as Edwards was pulled away to talk to the press just as I was about to get a picture with him. I also chatted up some of the campaign staff, who explained that this was their last stop for the day as they headed off to Myrtle Beach for more events tomorrow. This kind of surprised me, as it was still early in the afternoon, and Myrtle Beach isn't too far away.

We'll see what the coming weeks offer for more candidate visits. The Other Dr. K is going to get to see Michelle Obama tomorrow at her school, but there's nothing lined up so far at mine.
Posted by Dr. K at 4:58 PM

Thanks for that, living in Illinois, a democratic stronghold that's Democratic nomination is guaranteed to go to its home Senator, we're not likely to get a lot of appearances in our State. I love hearing about how the ground-level campaigning is going on in the other States.