Entertainment Weekly's Popwatch blog poses the question: "Was 1984 the greatest year in movies ever?"

The short answer is "No" (1939, 1967, and even 1982 all have better arguments), but still, in looking at the rather random list that EW provides, I was struck by what an important and formative year 1984 was for me as a film buff. More specifically, I saw a lot of these movies in the theater, and I watched many of them multiple times.

I was 15 in 1984, and several key events coincided that year which contributed to it becoming a cinematic annus mirabilis for me.

1) That summer, I got my driver's license.
For any teenager, this is a significant event, but growing up on a farm in North Dakota, it marked an extraordinary new level of freedom actually to do something on weekends outside of the family bounds. However, I didn't have a lot of attraction to some of the typical teenage hangouts, so the main thing I did with this freedom was drive to Fargo and go to the movies.

However, I do remember one key family outing in June of 1984. The nearby towns of Wahpeton, ND, and Breckenridge, MN, had the closest movie theaters: a single-screen theater in each town. At each, Tuesday night was dollar movie night. On one magical Tuesday night, my dad, my brother, and I went to the early show of Ghostbusters in Breckinridge, then drove quickly to the Wahpeton theater for the late show of Indiana Jones and the Temple of Doom.

I also distinctly remember going to see Cannonball Run II with my brother at one of those theaters later that month. And seriously, any year that produced Cannonball Run II has to be in the running for greatest year in film history:

If any movie marked the end of an era, it's Cannonball Run II. And not just because it's the final theatrical film for both Frank Sinatra and Dean Martin. As stupid as Cannonball Run II is, it's also clear that everyone involved in it is having a blast, and that fun can be infectious for the audience. I can't imagine what the cast of an equivalent movie today would look like, nor can I think of a movie since that feels like we're watching what must have been a really fun party (perhaps the closest equivalent would be the Ocean's 11 movies).

2) In conjunction with the driver's license, this was the first year that I successfully got into R-rated movies.
When I looked at the EW list, I was especially surprised at how many R-rated movies I had seen in the theater that year: Bachelor Party, Beverly Hills Cop, A Nightmare on Elm Street, Friday the 13th: The Final Chapter, Tightrope, and The Terminator (which was a life-changing experience). Plus, missing from EW's list: Hot Dog...The Movie and Police Academy.

In the midst of the comedies and horror films, the odd movie on this list is clearly Tightrope. 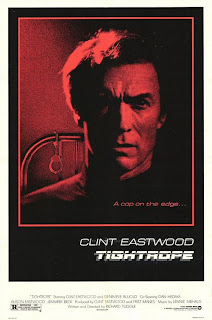 Despite the fact that I was too young for R-rated movies, most of the movies on this list were aimed directly at my adolescent sensibilities. However, I was probably too young to see Tightrope. This movie, with Clint Eastwood as a New Orleans detective who is drawn into some kinky activities while investigating sex crimes, freaked me out, though I imagine today that it wouldn't be much worse than any three average episodes of Law & Order: SVU. I remember leaving the theater feeling very unsettled.

Tightrope is the kind of adult thriller--like Body Double of the same year--that just isn't made very much today. The seeds of Bachelor Party and Police Academy can be seen in the resurgence of R-rated comedies over the past few years (though a few years ago, R-rated movies were all but dead at the box office), while horror movies have generally been watered down for PG-13 audiences. The PG-13 rating, in fact, was created in 1984 following concerns that movies like Indiana Jones and the Temple of Doom and Gremlins contained too much violence for PG audiences.

3) In 1984, my mother began working as a salesperson for the local cable company in Fargo.
My parents were divorced by this time, and I spent weekends and summers with my mom in Fargo. When she started working for the local cable company, we got free cable, complete with all the premium channels, as a perk. So, I spent the summer of 1985 watching many of these 1984 movies over and over on HBO and Showtime, especially Sixteen Candles, Star Trek III, Johnny Dangerously, and The Flamingo Kid--each of which seemed to be aired on a daily basis. Clearly, I didn't get outdoors much that summer.

4) Most significantly, I started developing a greater sense of quality and taste.
Frankly, I saw a lot of movies that weren't exactly good in 1984, and in looking over EW's list, I can't say that I had very discerning taste. I mean, I did see Hot Dog...The Movie in the theater, after all. But I also saw Amadeus and The Killing Fields as well, and I made an effort to see all the film's nominated for Best Picture in the first months of 1985 (not always a measure of quality, I know, but clearly a sign that I was making an effort). I also went to Buckaroo Banzai, Spinal Tap, and Repo Man, all of which I would watch again and again in the years to come as they formed a foundation for the types of movies I would like.

Like the Popwatch blog, I may be exaggerating the importance of 1984 through the rose-colored glasses of nostalgia. After all, a lot of movies on that list have a nostalgic kitsch about them that is dependent on a viewer being a certain age that that specific time, especially the teen comedies of that year. Hard to Hold, for example, has a particular nostalgic relevance for me. It's not a good movie by any stretch, but the following summer I dated a big Rick Springfield fan, and that movie came up a lot, so I tend to think of it fondly. 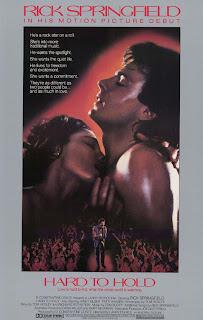 In thinking back to that year, and to all the movies I saw then, I recognize a real transition that took place, where I started to work on being a more educated film buff while also being a voracious film consumer. Some of the movies from that year, like Stop Making Sense, Blood Simple, and Stranger Than Paradise, would become important for me later as well.
Posted by Dr. K at 8:02 PM

If pressed, I could make a argument for 1994...and if I wanted to talk about the most influential in recent years, 1999 gets a shout.

1984? A lot of good adaptations...but when Beverly Hills Cop AND Splash got nominations for best original screenplay, you know Hollywood was having a weak year...

And that's really what it boils down to. I get so irritated with people trying to make objective claims like "1984 was the best year for movies ever" when what they mean is "a lot of movies I liked as a kid came out in 1984".