The Gil Kane Punch of the Week 10

Over the past week, the Drs. K have been moving their home office, which has meant little time for anything but packing, unpacking, and cleaning. Plus, most of the Gil Kane comics are still packed away in what will become the new Spec Headquarters. While the old Spec Headquarters devolved over the years into stacks and stacks of unsorted comics, the new one has room to grow, which should allow the 100-Page Super Spectacular to become a much more efficient comic blogging machine. But until that gets set up, some friends have chipped in some Gil Kane punches to help with the lag.

First up is pal Dave Lartigue of Dave Ex Machina, who has provided what is the earliest example of a Gil Kane punch I have yet to see, from "Mystery of the Counterfeit Space-Cabby!" in Mystery in Space 26 (June-July 1955), written by Otto Binder and inked by Bernard Sachs: 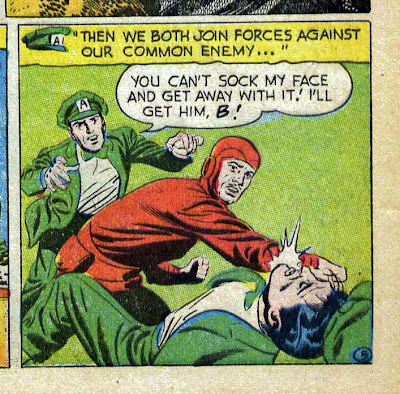 I would consider this a kind of proto-Gil Kane punch: the basic elements are there, and we can see how this would eventually evolve into the panel-breaking violence of later years.

You can find more on this story, and about Space Cabby in general, from Dave's great new weekly feature, "Space Cabby Sunday!" Thanks, Dave!
Posted by Dr. K at 10:35 PM