Everyone who knows me knows that I love Batman. Even my students have begun to spread the word to each other that, if I ever ask them who would win in a fight between Batman and someone else, the answer is always "Batman."

And while I liked "Batman RIP" a heck of a lot, and I enjoyed what Grant Morrison did with Batman in Final Crisis, I really had no interest in reading Battle for the Cowl. I figured, as long as I could get confirmation that Dick Grayson was the new Batman, I would be fine skipping the series.

So, last month, I jumped into the new Batman comics that shook out of Battle for the Cowl, trying to figure out which ones I would be following for the duration of the "Batman: Reborn" storyline until the inevitable return of Bruce Wayne. (I did, however, skip Gotham City Sirens, as that series didn't interest me just based on its basic concept.)

Here, then, are my reviews of five of the post-Battle Batman comics that came out in June. I did discover, however, that my initial instinct was right: I didn't need to read Battle for the Cowl, as most of these comics got me up to speed easily. 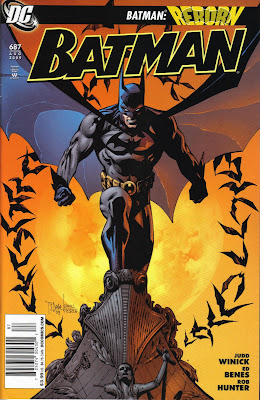 I really don't care for Judd Winick as a writer of superhero comics, though I think he does his best work when writing non-powered heroes like Green Arrow (though his Green Arrow/Black Canary series was abysmal) and Batman. In fact, aside from the crap about Superboy punching a continuity wall and bringing back Jason Todd, Winick's previous run on Batman was inoffensive and readable.

It makes sense, then, that Winick's return to the character would involve a confrontation with the Scarecrow, the first villain Winick used in the previous run. Though the Scarecrow story barely starts in this issue, most of it is taken up with Dick Grayson's struggle in making the transition from Nightwing to Batman. There are some nice moments where Nightwing and Alfred come to the decision that Batman can't die, though it would seem that this is ground that should have been covered in the transitional miniseries. I like the interaction between Nightwing and Alfred here: Alfred admits that he can talk to Dick in a way that's different from the way he talked to Bruce, and that should pay out with some interesting character moments in the issues to come. Winick also seems to establish a clear purpose for this book in the grand scheme of the Bat-universe when Dick tells Alfred, "There'll be times when I'll need to go it alone." Therefore, I expect that this series will feature mainly Robin-less adventures, as opposed to the two other monthly Batman books.

However, compared to some of the other series, this one just didn't grab me that much. Part of that had to do with Ed Benes's art, though this appears to be his only issue of the series, as Mark Bagley is coming on for the next two issues. It also feels like this is the book that's going to concern itself the most with continuity issues and the new Batman's larger relationship to the DC Universe. While that's probably necessary for some readers, I prefer what some of the other series are doing with the new status quo. 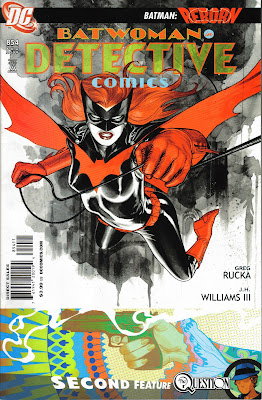 Man, this comic is a freaking work of art. I love that DC snuck a superhero story that's a bit unconventional into its flagship title, instead of spinning it off into another new series, like Streets of Gotham. J. H. Williams III's art is phenomenal, shifting gears between experimental page layouts for the action scenes with Batwoman and more conventional storytelling for the character moments with Kate Kane. Greg Rucka is also playing around with the idea that Batwoman is still an unknown quantity, so the last panel leaves us wondering what kind of hero she will be.

I would also buy a monthly comic featuring the Question by Greg Rucka and Cully Hamner, so I have no problem with the larger pricetag for the Question co-feature. In its first chapter, this series makes me more interested in the new Question than any of the stories featuring her over the past couple of years. It feels like, in these two stories, that Rucka is getting to use these characters in the way he wants to after shaking off some of the 52 and Final Crisis baggage (though we do see that the Crime Bible is still going to be a factor at least in the Batwoman series). 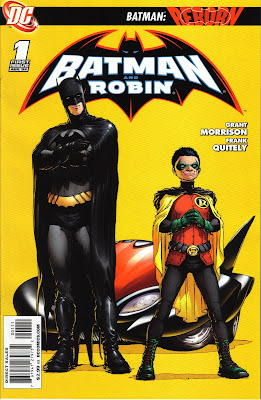 This book is the shit, and it makes the whole Battle for the Cowl event worthwhile. As anyone who reads this blog knows, I am totally and unapologetically in the tank for Grant Morrison, but this is pretty much my ideal for a superhero comic. The interaction between a dark Robin and a more lighthearted Batman seems especially fruitful. Also, in just a few panels, the new villain, Mr. Pyg, is shown to be a disturbing and unsettling threat, much in the way Steve Englehart and Marshall Rogers used The Joker in "The Laughing Fish." Finally, Frank Quitely's art, which was already amazing in All-Star Superman, seems to have progressed even further here. This is one of the few comics that I can't wait for every month. 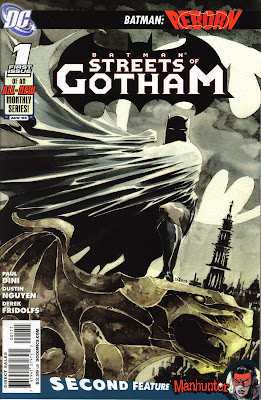 I have a hard time understanding what the purpose of this new series is. It uses the same team that was previously on Detective--Paul Dini, Dustin Nguyen, and Derek Fridolfs--and it feels entirely consistent with their work on that series. I had hoped that this series could serve as a kind of "Batman Family" title, featuring some of the other Gotham heroes who are trying to fill in for the original Batman; however, from this issue, it seems to be just another Batman and Robin title. It just doesn't seem necessary.

Plus, I just didn't care for the story. As disturbing as Mr. Pyg might be in Batman and Robin, I was more put off by the mass casualties that Firebug causes in this issue. There have been so many mass killings and disasters in Gotham City over the past two years, it would be nice if the Batman books had a moritorium on such things.

I was a bit disappointed with the Manhunter co-feature by Marc Andreyko and Georges Jeanty. I was a big fan of the Manhunter series, and I was disappointed that it was cancelled, but Andreyko did a great job wrapping it up. However, the idea of Kate Spencer as Gotham City's D.A. is intriguing enough for me to stay interested, though that may not be enough incentive to keep buying this series every month. 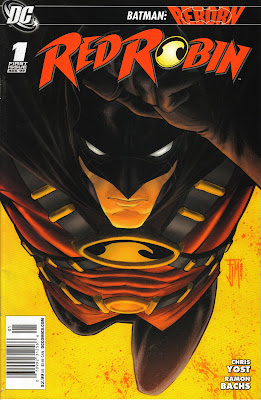 On the surface, Red Robin has the clearest purpose of all the new Bat-universe series. Tim Wayne, formerly Tim Drake, travels through Europe trying to find evidence that Bruce Wayne is still alive after Tim has lost the Robin job to Damien Wayne. However, this issue mainly involves Red Robin complaining about getting distracted by crimefighting while he's on this quest. I'm not sure exactly what evidence Tim is finding in Europe, as Bruce Wayne is lost in prehistorical times, though his investigation may have something to do with Ra's al Ghul, who appears at the end of this issue. I'll probably give this series one story arc before making my final decision, but if it turns out that Red Robin's quest is interminably delayed by other plots, I may get quickly frustrated with it.


So, I'm hooked in to Detective Comics and Batman and Robin for the duration. The others, I'll give one story arc before I make my final decision, but Batman and Red Robin are definitely on a shorter leash than Streets of Gotham.
Posted by Dr. K at 7:20 PM

Dr. K wonders:
"I'm not sure exactly what evidence Tim is finding in Europe, as Bruce Wayne is lost in prehistorical times..."

Which means that he's had gobs of time to leave evidence and hints as to where (when) he is, as shown in the JLA Obsidian Age story, where the JLA were buried in Atlantis in ancient history as bait for heroes in the future.

My favorite use of this sort of thing was that, as part of his plan to finally destroy Superman in DC One Million, all Solaris did was give the JLA thousands of years to plan his defeat. By that Grant Morrison guy who's haunting your tank.

Gary, I think your prediction will probably prove to be correct, though this issue has not really given a clear reason as to what led Tim to Europe in the first place. I have a feeling that Tim's first impulse is to track down Ra's because he's usually the first suspect when mysterious bad stuff happens to Batman.

Grant Morrison's Batman is going to go down in history as one of the defining changes in the Bat books, just like his run did for the X-Men.

I like that he isn't going with a big epic long plot just yet. These first three issues, and the circus of the weird, seem like a good way to give us some cool Bat-Action while easing us into the new dynamic duo.

I hope Morrison gets to write this book for a long while (and Bruce not come back for even longer) I love the original Batman, but this is such a cool change of pace. I don't want it to end too soon (like Captain America is.)

I'm with you on most points.

B&R is the best of the bunch, in fact, one of the better superhero comics being published right now. But how will it look on non-Quitely arcs?

I disliked Streets tremendously, the 10-year-old prostitute thing gratuitous, pointless and in bad taste. If I have to get it just for Manhunter, I'm gonna be pretty frustrated with it.

Sirens is Dini's other fetish book, more pointless T&A and Zatanna in bondage.

Detective looks really great and I'm very interested in the new Batwoman. The new Question less so, but it's not annoying me.