The Super-Sons in "Crown for a New Batman"

Remember the time that Batman died, and a battle broke out as to who would be his successor--a battle that included both Batman's son and his ward, Dick Grayson? 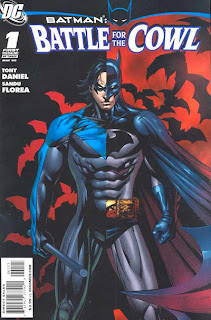 No, not that one. This one: 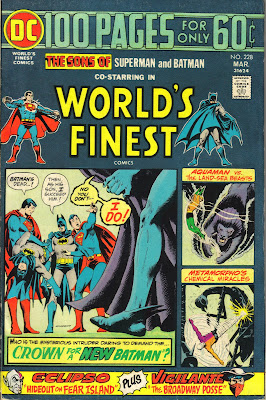 Fulfilling my theory that everything in comics today is just a variation on something Bob Haney thought up in the 70s, we have World's Finest 228 (a 100-Page Super Spectacular!), featuring the Super-Sons in

A story written by Bob Haney (of course) and drawn by Dick Dillin and Tex Blaisdell (and reprinted in the Saga of the Super Sons trade).

As the story opens, Superman, Bruce Wayne Jr., and Clark Kent Jr. discover that Bruce Wayne has been murdered, apparently while enjoying a pipe and some journaling. 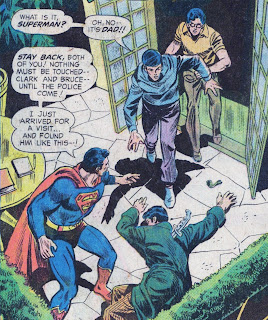 Bruce is clearly killed by a very ornate knife, which should provide some clue as to the identity of his murderer. In addition, Superman gets all CSI up in this place and finds a well-hidden clue:

Clearly, Batman has lost a few steps in his later years. Otherwise, how else do we explain that some fourth-rate killer that left such obvious clues could get the drop on the world's greatest detective?

Word gets out about Bruce Wayne's death, and Alfred even permanently hangs up the Batman costume. As the family gathers to mourn, the subject of Batman's successor comes up: 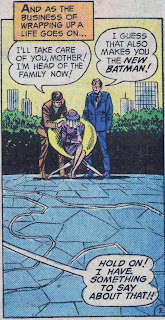 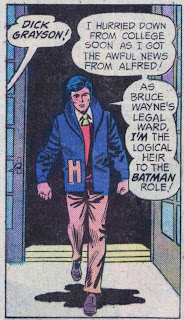 Dick Grayson arrives back from college to lay claim to the Batman mantle that Bruce Jr. thinks belongs to him.

Wait a minute--Dick's back from college? Exactly how long has he been in school? Didn't he leave for college before Bruce was married and Bruce Jr. born?

Bruce Jr. and Dick bury the hatchet long enough to put Bruce in the ground. Then, during the reading of the will, Bruce Jr. and Dick anticipate some closure on their conflict. However, while the will does distribute Bruce Wayne's estate. Alfred is given $20,000 a year for life, which I can't imagine would go very far in Gotham City, even in 1975 dollars. Dick gets a million, while Bruce Jr. and Mrs. Wayne get the bulk of the estate.

However, there is an addendum to the will: Bruce has left $5 million to a "former partner" named Simon Link. No one knows who this beneficiary is, though that mystery is overshadowed by the failure of the will to settle the Batman debate.

Simon Link, however, does appear to claim his inheritance, and surprisingly, no one mistakes him for Oliver Queen.

Also, if this is the kind of thing Bruce Wayne invested in, then I would guess that opening the books on Wayne Enterprise investments would reveal a nightmare of unethical, quasi-legal activities: polar bear boots, elephant ivory, whale oil, rhinoceros horn, panda coats.

Before Link can claim his money, however, the lawyer finds yet another stipulation in the will: Link must take Bruce Jr. to the Arctic to "show him the tough, character-building life of the Arctic seal hunter." Man, Batman was one crappy dad.

So, the whole gang goes along to the Arctic to learn the life of the seal hunter and investigate Bruce Wayne's murder.

Once they arrive, Batman Jr. and Robin decide to take to the water: Junior in a kayak, and Robin water-skiing on an ice chunk behind some seals.

I can't imagine Robin's choice of transportation is particularly effective, but then again, you have to question the judgement of a guy who wears that costume in the Arctic.

They soon find an eskimo named Malook, who is the prime suspect for Bruce Wayne's murder. It turns out, Malook did try to kill Wayne because of his investment in the seal hunting operation, which is destroying his native village. The heroes then turn their investigation on Link, who ends up being the real villain. Once he realizes the jig is up, Link tries to escape by disguising himself as a seal. This turns out to be a really bad idea, unless Link was planning on showing everyone his impression of Bo Derek in Orca.

I love how we see Superman flying around in the background, doing nothing to save Link. You'd figure a guy with super-hearing, x-ray vision, and super-speed could have prevented this.

Once Link is dead, Batman reveals himself to be alive all along, and his death was an elaborate ruse to trap Link--a ruse that Superman was also in on. 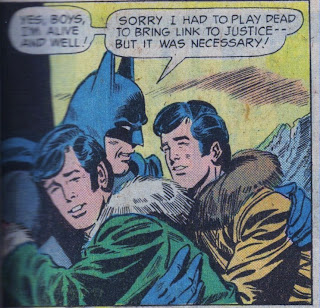 Batman claims that faking his own death was necessary to trap Link, but I can't imagine that this was Batman and Superman's only option. After all, we're dealing with a half-assed seal hunter here, not some professional super-villain. I think Batman just liked screwing with everyone--making his family go through the trauma and sorrow of a funeral, changing his will in order to draw out Link. Bruce has a huge legal mess to clean up when he gets back, along with a long list of fraud charges. I have to wonder if this plan was really thought through very well.

One note on World's Finest 228: this may be the Bob-Haneyest comic ever made. In addition to the Haney-penned main story, the issue also reprints Aquaman, Metamorpho, and Eclipso stories by the writer as well. That also makes this one of the most awesome comics ever produced.
Posted by Dr. K at 11:02 AM

Well I think you just sold me on the Super Sons book.

I bought that when it was new. And gotta tell you, one of my favorite scenes ever from a comic is when the bad guy dresses up as a seal and crawls across the ice with predictable results.

Thanks for the math. Does that also mean that Bruce Wayne made over $20 million in today's dollars off of the seal hunting operation?

The only thing that'd make it better is if the kayak had a Batman logo on it and they referred to it as the Bat-yak.