In addition to moving home offices, I've been doing a lot of Gil-Kane-punching-related research over the past couple of weeks. Much of this research has involved reading through most of Gil Kane's fantastic (though surprisingly punchless) early 80s run on Action Comics with Marv Wolfman. 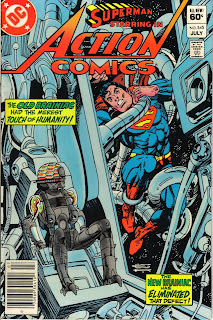 While researching these comics, I've been struck by the reactions to Kane's Superman art that ran in the Action Comics letter pages. Although there is a lot of praise for Kane from right-thinking readers (including some readers claiming his Superman is the best ever--suck on that, Curt Swan), there was also a strong and vociferous negative reaction that ran in the letter pages for several issues. I want to spend some time here focusing on these many wrongheaded and misguided comments that are clearly on the wrong side of history and deserving to be on the receiving end of their own Gil Kane punches(names and addresses have been removed to protect the idiotic).

First up is this missive, from Action 545 (July 1983), by a Mexican reader who claims that there is no future in Gil Kane:

Clearly, the writer, with his claims of "sacrilege," was a member of the little-known Curt Swan cult that emerged in southern Mexico in the late 70s. However, this cult was quickly wiped out by Zapatistas soon after this letter was published, so he probably never got to see if his precious Curt Swan ever returned to the title.

Others took a safer, though no less wrongheaded, route by claiming that perhaps Kane wasn't suited for Superman, as we see in this letter from Keith Pollard's one fan:

A similar complaint was that Kane's art really required an inker, which is patently ridiculous. Through most of his career, Kane's art was plagued by inkers whose style overwhelmed the pencils. Most of the suggestions on inkers would simply recreate this travesty:

Other writers suggest such inkers as Frank McLaughlin and Dave Hunt, neither of whom were suitable for Kane's pencils.

This debate raged on in the letter pages for many more months, if you can believe it, with the rhetoric becoming increasingly more vitriolic, which may come as a shock to comics fans who are used to the balanced, reasoned discourse that is now commonplace among such fans in these more enlightened times. In fact, these two letters in particular should earn their writers special Gil Kane punches of their own.

This guy is especially douchey, suggesting that one of the greatest artists in comics history--one of the architects of the Silver Age who apprenticed with the likes of Jack Kirby and Bernard Baily--needs "art lessons": 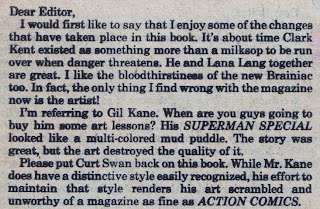 I would remind everyone that the Superman Special to which he refers contains this panel and this one.

However, this following letter makes me want to track down the writer at the address he provided (though it is 26 years old) and re-enact a Gil Kane punch on him, using a plate glass window in lieu of a traditional comic panel:

Really, how far on the wrong side of comics history can you get when you claim that comparing an artist to Kirby, Ditko, and Janson is not a compliment?
Posted by Dr. K at 11:53 AM

That last letter was obviously written by some kind of maniac.

'scuse the delete, if you will, matey. just repeating myself.