In a month that has seen Dr. K overlooked by the MacArthur Foundation, Oprah (Oh, Oprah--what does Marquez have that would cause you to pick him for your book club twice before Dr. K?), and the National Book Awards, now the Nobel Prize committee has seen fit to add to what was already a trifecta of disappointment by awarding the literature prize to Doris Lessing. 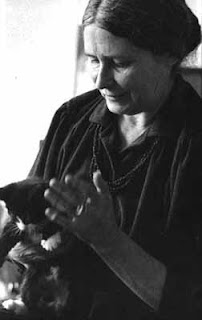 In all seriousness, I met the news of this prize this morning with surprise not because I thought Lessing was undeserving, but because I was almost sure she had already won it.

The Golden Notebook (1962), the work most often mentioned as Lessing's masterpiece, is a novel that I read at just the right time in my intellectual development. It was my senior undergrad year, and the novel helped cement my appreciation for the playfulness and challenges of postmodern narratives. And, at the time, I felt a great sense of accomplishment in having completed it.

The novel involves a writer named Anna Wulf who keeps four separate notebooks designated by different colors: black, red, yellow, and blue. Each serves a separate purpose in her process of both autobiographical and fictional creation, and the division between the two forms blurs. The novel itself shifts between these notebooks and a novella called "Free Women," in which Anna is a character. To make things more complicated, we are often informed that the notebooks have various formal qualities that are explained in bracketed passages: notebooks are written in columns, or with front and back sides of pages serving different purposes, or as diaries, or as scrapbooks of newspaper clippings.

In a graduate course on postmodern British fiction, I made the comment that it would be interesting to disassemble The Golden Notebook and re-arrange the pages in order to read each notebook separately and on its own. But then, I didn't want to do that, I cracked, because it would ruin what was an expensive book. The professor then refered to me as a "smart-ass."

I also often find myself thinking of her quintet of novels collectively titled The Children of Violence. The title refers to the post-World War I generation, who have collectively witnessed a world that is filled with violence on a scale never seen before in history, and world events so often seem to bear out the fears and anxieties of these novels. The title character, Martha Quest is a loosely autobiographical version of Lessing herself, and the novel follows her from the interwar period in her native Africa through the Second World War. The final novel, The Four-Gated City (1969), begins with Martha in England during the 1950s, but Lessing takes an ambitious turn in this autobiographical series by moving it into the future, imagining a World War III that closes out the century.

The Nobel Prize committee made a good call here, and the award should encourage more people to read Lessing's novels.
Posted by Dr. K at 12:37 PM