Dr. K's Halloween Countdown Presents: The End of the Creature Commandos and G. I. Robot!

As a bit of a companion piece to this entry over at the Invincible Super-Blog (as well as a follow-up to this post), here is the final appearance of both the Creature Commandos and G. I. Robot from Weird War Tales 124, also the final issue of that series: 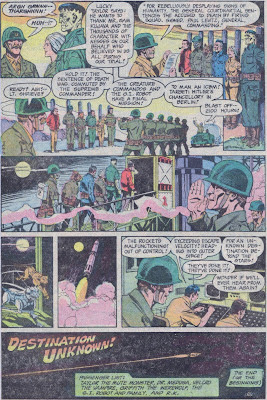 This isn't just the final page, it's the entire story! Apparently, writer Bob Kanigher and artist Fred Carillo were given one entire page in this final issue to wrap up the stories of their creations. Obviously, this didn't sit well with the writer in particular, as he takes the opportunity to make a couple of digs in the story.

Here, the Creature Commandos get screwed in every way possible. First, they are put on trial "For rebelliously displaying signs of humanity," which is a total bullshit charge, and on top of that, they've had thousands of character witnesses speak for them at their trial, but to no avail.

The verdict also comes from a general whose name is exactly the same as the editor of this comic, which leads me to believe that Kanigher is dropping in some behind-the-scenes subtext that reveals his true feelings about the powers-that-be at DC.

However, Lt. Shrieve arrives with some new orders: the Creature Commandos, along with G. I. Robot (who seems to be thrown in for no reason), are "to man an ICBM" to blow up Hitler's Chancellory! Is manning an ICBM really a six-person job?

Turns out it isn't, as the job, like the verdict, is also bullshit, and the rocket heads into outer space rather than to Berlin.

Wait--six-person job? There were only four members of the Creature Commandos, plus G. I. Robot. So, who's the pipe-smoking man in the red jacket? According to the "Passenger List," it's "R. K."--none other than Bob Kanigher himself! Kanigher wrote some crazy-ass stuff, but he even tops himself here by riding off into space with his own creations. That's just got to be a big "screw you" to DC for cancelling the series.
Posted by Dr. K at 10:29 AM

You're right, that IS the weirdest Bob K. story ever. But, in its own insane way, touching.

Way back in Wonder Woman #158 (1965) Bob Kanigher wanted to change the direction of the comic, and rather than having a multipart crossover "event", or pretentious metaphysical angst, he just called the cast into his office and fired most of them.

Bob Kanigher is what Grant Morrison wants to be when he grows up.ehwwoj

And now they are back in Action Comics 872:
http://www.comicbookresources.com/news/preview2.php?image=solicits/dccomics/200812/superman_batman/AC-Cv872.jpg