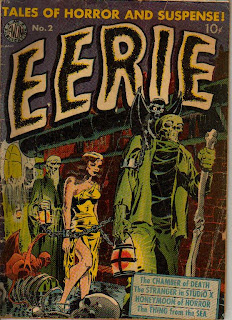 This Wally Wood cover from Eerie 2 is probably my favorite horror comic cover in my collection. This just doesn't look like a good situation. 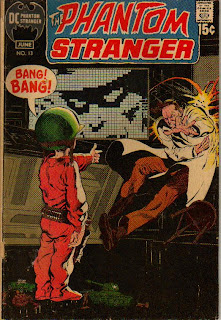 I've had this issue of Phantom Stranger since I was a kid, and for some reason, this Neal Adams cover gave me nightmares. I think, even then, I had a fear of evil children. 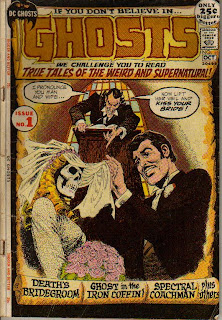 This Jose Luis Garcia Lopez cover for Ghosts 1 meets Chris Sims's criteria for a good horror comic cover by featuring a skeleton where it shouldn't belong. 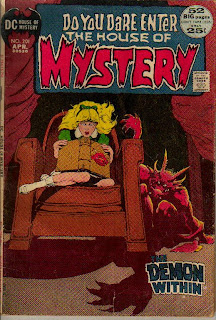 House of Mystery 201 is a comic I wish I still owned. The cover story, with interior art by the great Jim Aparo, is about a kid who transforms into a violent, demonic persona. In order to control him, his parents arrange a lobotomy, and the last panel shows the boy playing on the lawn in a near-vegetative state. Just substitute Ritalin for the lobotomy, and you've got a story that's still scary and relevant today. If I'm not mistaken, I think this cover is by Mike Kaluta. 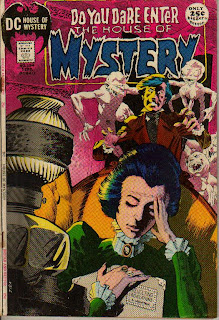 Another House of Mystery cover, this one by Berni Wrightson. Wrightson is awesome, and that is all I have to say about that. Also, like the last cover, this one also features a female character reading in a chair while a threat looms behind her. Interesting. 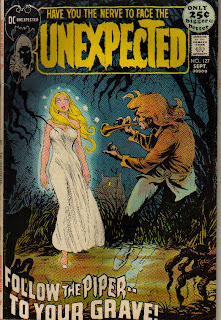 While Wrightson and Adams did some great covers for DC's horror books in the 60s and 70s, I think that Nick Cardy's covers for the same books are quite underrated (and often uncredited, though his style is distinctive enough to spot). This cover has more fantasy elements to it, but it's still nicely done. 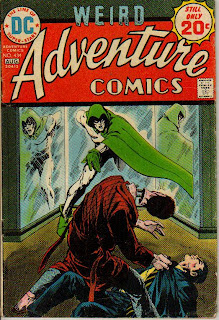 Though not a horror title per se, Jim Aparo's Spectre covers for his run on Adventure Comics were really boundary-pushing in the 70s. This one also had an effect on me as a child. 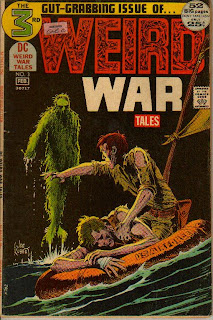 Joe Kubert did the first five covers or so for Weird War Tales, this one being for issue 3. These covers really combined Kubert's talents for both war and horror comics. I also like the adjective "Gut-Grabbing." 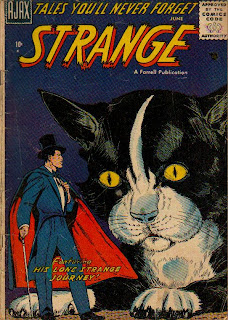 Not a scary cover, but I do like cats. 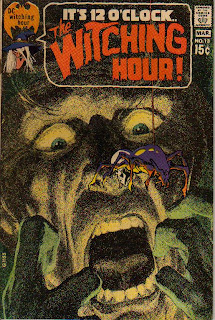 Take the stupid spider with a skull off this Neal Adams cover, and it makes a certain painting by Edvard Munch look like a pile of puke.
Posted by Dr. K at 10:20 AM

Boo-boo! The GHOSTS cover is by Nick Cardy, not Lopez.

Thanks for the correction, Robby.

Is that Swamp Thing on the Weird War Tales cover?

It's not Swamp Thing--it's a seaweed creature/ghost.

Hi...I have always bin facinated of DC Unexpected 127...al the story are fantastic, but specially the first one "follow the piper to
your grave" also the cover.

Anybody knows who were the artist on this story?