In the old House of Mystery series from DC Comics, the thirteenth page of each issue was specially marked in some way. Often, by looking at the page, the reader was promised bad luck for a signficant amount of time: anywhere between 7 and 100 years.

Now, anyone familiar with DC's horror comics in the 60s and 70s knows that, for the most part, they weren't very scary. As a kid, I was scared by just about anything, and even I found these horror comics to be tame. Here's an exception, from the 13th page of House of Mystery 175 (1968)--reprinted in the Showcase Presents: House of Mystery Volume 1 collection--written by Joe Orlando and drawn by Sergio Aragones. 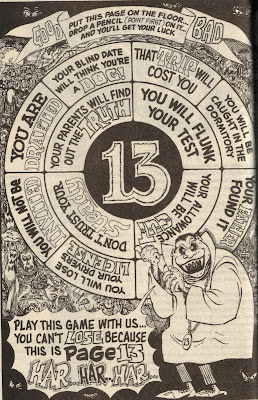 Some of these choices are pretty scary, and I have to wonder who the target audience was for this. Clearly, this was pitched at college-aged readers, with choices like "You are drafted" and "You will be caught in the dormitory," though some of the parent-related choices seem aimed at a younger audience. The "drafted" one is particularly disturbing, considering the time the cartoon was published. In addition, many are downright edgy and subversive. What is it your father found? What is the "truth" your parents found out about? What kind of "trip" are we talking about here?
Posted by Dr. K at 1:16 AM