ComicMix launched its first web comic today with the return of a great badass comic character from the 80s: Grimjack. The web comic, by the original Grimjack creators, John Ostrander and Tim Truman, will be serialized weekly.

The first six pages look very good so far, and the web reader ComicMix has created works well. Also, the story is quite "new reader friendly." The basic Grimjack concept is pretty easily accessible, anyway. As an early caption in the story reads, "The name's John Gaunt, aka Grimjack, and I'm the guy you hire when you need an asshole on your side."

And if that's not enough to get you to check it out, then this should seal the deal: 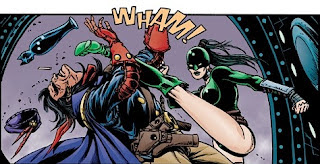 Other new series will debut daily for the next week, including Grimjack spinoff, Munden's Bar.

Mike Gold, former editor at DC and First Comics, has put together a great line-up of creators, many of whom are revisiting creations originally published by First Comics in the 80s. I'm personally looking forward most to the return of Mike Grell's Jon Sable, Freelance, which ranks in my top 5 all-time favorite comic series.

For anyone who wasn't around during the heyday of First Comics in the 80s, it is impossible to overstate the quality and significance of the work put out by that company. Howard Chaykin's American Flagg!, Mike Grell's Jon Sable, Ostrander and Truman's Grimjack, Baron and Rude's Nexus--all of these were groundbreaking, amazing comics, and Mike Gold did a fantastic job as editor cultivating the talent and giving them freedom to explore their visions. I'm incredibly excited for this new venture from ComicMix, and it's already off to a great start.
Posted by Dr. K at 7:57 PM

Aw, you're making us blush.

You'll really enjoy Sable a lot-- I'm having a blast coloring it, and it's some of Mike's strongest work to date.

But feel free to enjoy the rest of the site as well.