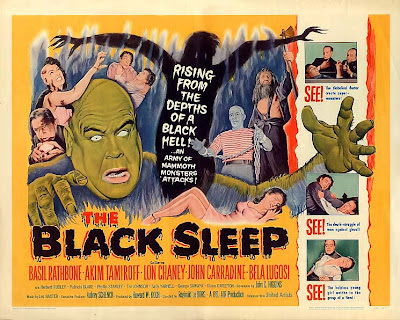 In looking at the cast list for the 1956 film The Black Sleep, one could easily come to the conclusion that this was the greatest horror film of all time. The movie stars Basil Rathbone, Akim Tamiroff, Lon Chaney Jr., Bela Lugosi (in his last film role), John Carradine, and Tor Johnson (or, as I like to call him, "Holy Shit! Tor Fucking Johnson!"). However, that conclusion would be wrong, because The Black Sleep is a terrible movie.

That being said, I would still recommend this movie for one reason: the film's climax is amazing!

The movie takes place in 1872 London, with Rathbone as Dr. Cadman, a Victorian brain surgeon who uses a Middle Eastern drug called "the black sleep" in order to put victims into a zombie-like state and experiment on their exposed brains using electricity. His assistant, Gordon Ramsey (whose name makes me laugh throughout the movie), is a disgraced surgeon who was about to be executed for murder when Cadman rescues him with a timely administration of the black sleep.

The movie spends an enormous amount of time establishing verisimilitude for Cadman's work by having the two doctors talk endlessly about historical neurological and electrical experiments. This drags the pacing down, and the direction by Reginald LeBorg (whose name is French for "The Borg") is particularly leaden, despite a game performance by Rathbone.

The rest of the cast is completely wasted. Lugosi plays Cadman's mute manservant, Casimir. I've read that Lugosi's character was rewritten as a mute because he couldn't remember his lines, but I have a hard time believing that, as the character's muteness is appropriate: he is another of Cadman's failed neurological experiments. Chaney appears as an idiot man-beast named Mungo. Mungo's story, however, provides one of the few interesting moments of the film. Mungo is really Dr. Munroe, a former colleague of Cadman who sought medical help for a slight paralysis on his left side. Cadman operated, curing the paralysis (for the most part), but rendering the former brilliant surgeon a violent, lumbering idiot. Why they changed his name is never explained, though Mungo does seem more fitting for his current state than "Dr. Munroe." 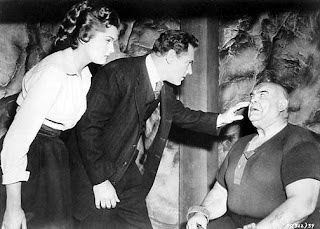 John Carradine and Tor Johnson do not even appear until the finale, but then the movie picks up in an amazing way. Ramsey finds both of them, and a couple of others, held prisoner in Cadman's dungeon--all victims of Cadman's brain experiments that went horribly, horribly wrong (or horribly right for the film's audience). In the film's climax, the prisoners escape and proceed to wreak vengeance on the doctor who harmed them. Carradine, as an insane man who believes he is a biblical prophet, repeatedly cries out "Death to the infidels!" while he swings around a heavy cane. Tor Johnson, playing a blind giant named Curry, gladly follows Carradine's orders, strangling Mungo to death. Tor wasn't in many movies, so it's always exciting to see him at work, even if only for a little bit. And watching Tor Johnson fight Lon Chaney Jr., for horror movie fans, is akin to the Ali-Frazier fight for boxing fans. 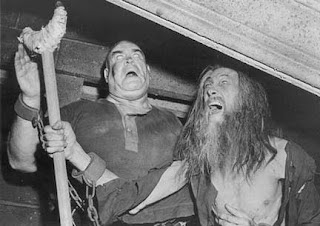 The last ten minutes have an energy not seen in the rest of the movie. They also depict a strong visual influence from German Expressionism that seems to come out of a different movie. Even the film's publicity, including the lobby card depicted above, emphasizes John Carradine and Tor Johnson, which seems a bit misleading.

According to the Turner Classic Movies website, this movie is not available on home video. Check out their page on the movie here for a great publicity still of four horror icons goofing off.
Posted by Dr. K at 10:52 PM