Gil Kane Punch of the Week 12: A Punch-stravaganza!

This week's Gil Kane Punch is more like a punch-stravaganza, courtesy of Bully, the Little Stuffed Bull! 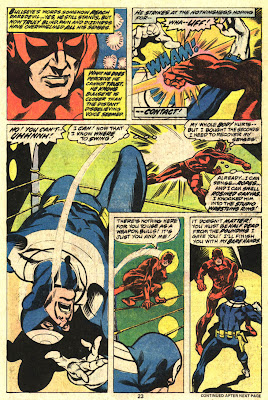 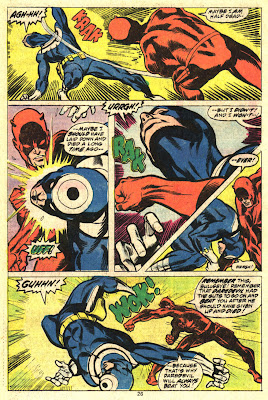 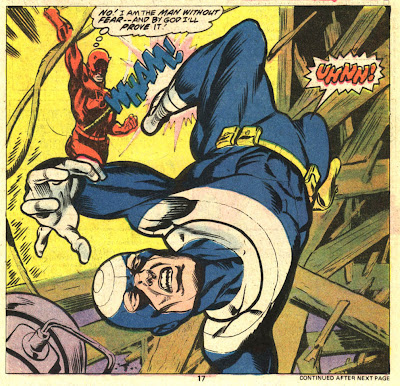 Daredevil beats the living crap out of Bullseye live on TV in Daredevil 146, story by Jim Shooter, inking by Jim Mooney. This was an extremely satisfying conclusion to an ongoing story where Bullseye persistently taunted and foiled Daredevil, and in this issue, Bullseye takes over a TV station and challenges Daredevil to a fight live on TV! To make this victory even more satisfying, Daredevil is deprived of his hyper-senses when he wails on his arch-enemy! (And people say Daredevil wasn't good until Frank Miller took over!)

I'm really glad Bully provided me with these images. I had this comic when I was a kid, and I read the heck out of it, so it had a profound impact on my development as a Gil-Kane-punchophile.

Bully is the host of the most consistently fun comics blog on the internet, Bully Says: Comics Oughta Be Fun!, which is also the home of 365 Days of Ben Grimm, a year-long, daily project that makes me feel humble and embarrassed when I fail to produce a punch a week.
Posted by Dr. K at 2:53 PM

Thanks for the nice words and the link-a-roo! Mama Bull always used to tell me to "srop raising Kane!" So it was nice to be able to on your blog-thingee, Doc!

I have this issue in the stacks somewhere, but I recently re-read it on the Gil Kane tribute site: His Name is... (http://gilkane.blogspot.com/). I thought Mooney did a nice job merging his style with Kane's on this story. I found the site after wanting to see more Kane after a few weeks of punches.