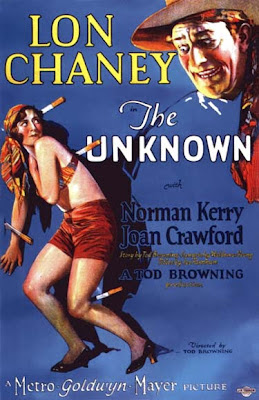 I flat out love Lon Chaney movies. I'm a silent movie junkie in general, but I have a particular affection for Chaney's movies, not only for his chameleon-like versatility and physical talents that led to him being designated "The Man of 1,000 Faces," but also more for the choices he made as an actor to play startlingly complex characters capable of extraordinarily awful behavior while still retaining the audience's sympathy. And no performance highlights those qualities more than "Alonzo the Armless" in The Unknown (1927), directed by the great Tod Browning.

Chaney and Browning collaborated on 8 movies all together, and this is my favorite of those that survive (I also really like The Unholy Three and West of Zanzibar. However, the latter film should not be confused with The Road to Zanzibar, a Hope-Cosby road comedy that I always seem to accidentally record when it's on TV, thinking it's the Chaney-Browning film.). It is 50-minutes of wall-to-wall crazy, grand guignol in all of its extremities. The first time I saw it, I was mesmerized--convinced that the movie couldn't get any crazier, and proven wrong with every new scene. When the movie ended, my eyes were wide, my jaw was open, and I couldn't believe that only 50 minutes had passed since the start of the movie. The initial experience of seeing this movie is so amazing, that if you haven't seen it, I would seriously recommend that you stop reading now, get a copy or wait for the TCM screening tomorrow during their Tod Browning marathon, and then come back here and read the rest. I really envy anyone seeing this movie for the first time.

(In fact, I've made a file for myself that is labeled "In Case of Amnesia," which contains a list of things to help myself out if such a circumstance were to arise. Early on the list, before I even reveal my own identity to my amnesiac self, I have the task "Watch The Unknown," just so I don't lose the opportunity to relive that experience.)

Lon Chaney plays Alonzo, an armless knife thrower who works for an Eastern European circus run by Zanzi, whose daughter, Nanon (a young Joan Crawford), serves as Alonzo's female assistant. Alonzo is secretly in love with Nanon, but she has a very strange pathology: she is repulsed by the touch of men's hands. This repulsion, however, gives Alonzo hope, as he has no hands to touch her with, anyway. Nanon, in fact, states very explicitly that she wishes all men would lose their hands. If that isn't an opening for Alonzo, I don't know what is. 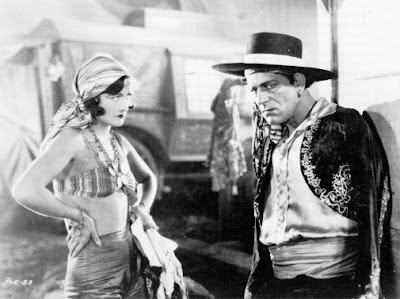 Alonzo, however, has a rival for Nanon's affection: the circus strongman, Malabar the Mighty. Malabar even consults Alonzo about the best way to court Nanon, and Alonzo, seeing the opportunity to throw a cockblock, advises him to take her in his arms. 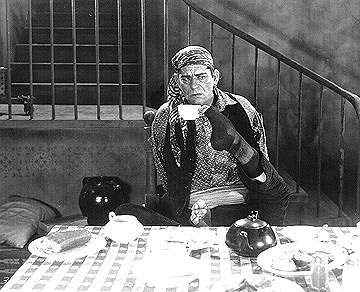 Alonzo's "armless" tricks are pretty amazing. Not only does he throw knives with his feet, but he also pours himself a drink, lights and smokes a cigarette, plays the guitar, and dries his tears with a handkerchief. When I first saw this movie years ago, I had heard that Chaney did many of the leg and feet "stunts" himself. However, according to Chaney biographer Michael Blake, Peter Dismuki, an armless circus performer who bore a striking resemblance to Chaney, doubles for Lon Chaney in many scenes, and it is Dismuki's legs we see whenever Alonzo uses his feet to perform tasks. So, when Alonzo plays guitar, it is Dismuki's foot coming from off screen to strum it, and it is also his feet that light the cigarette, and so on. Dismuki's talents are incredible. Chaney did do a lot of amazing stuff to undergo physical transformations for his movies, like tying his legs back and walking on his knees to play the amputee gangster in The Penalty.

The movie just keeps amping up the craziness as the plot barrels forward. In an early scene where Alonzo's assistant, Cojo (John George), undresses Alonzo, it is revealed that Alonzo is not armless after all, but instead wears a girdle to hide his arms. But before this revelation can really sink in, another comes quickly on its heels: Alonzo has two thumbs on one hand! It turns out that Alonzo and Cojo's circus act is merely a cover for their illegal activities (what those activities are remains somewhat ambiguous, though a bank-robbing scene was cut from the film). 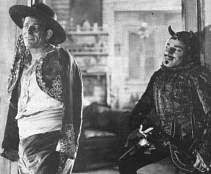 Cojo reminds Alonzo that the reason why Nanon confides in him is a lie, and the revelation of the truth of his "armfulness" is inevitable. This realization leads Alonzo to make a series of historically bad decisions that ultimately lead to his downfall in an amazing and thrilling climax to the movie. However, to Chaney's credit, no matter how repulsive Alonzo becomes through the course of the film, he still manages to maintain the audience's sympathy. Toward the end of the movie, when it is revealed to Alonzo that he has made some tragic mistakes, Alonzo goes through these extremes of hysterical laughter and sobbing that present, in my opinion, the best demonstration of Chaney's acting talent and the level of emotional quality achievable in silent films. 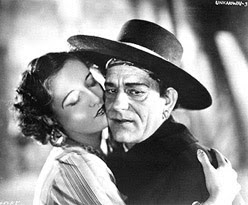 In recent years, Tod Browning has been getting a lot of academic attention, with several scholarly articles and books written about his films, especially his 1932 masterpiece, Freaks. I've long wanted to do some academic writing on The Unknown, especially because it seems to lend itself so easily to certain critical theories regarding psychology, sexuality, anxiety, and the body. Yet I can't get beyond those moments where I find myself writing things like, "Holy Shit! He has two thumbs on one hand!"

Be sure to check this movie out on TCM during tomorrow night's Tod Browning marathon. The film is also available on DVD from TCM, in The Lon Chaney Collection, which also includes Ace of Hearts, Laugh, Clown Laugh, the reconstruction of London After Midnight, and a great documentary on Chaney.

I'd like to thank you for upsetting my wife.

She's missing a days worth of crap Law and Order episodes now that I've hijacked the DVR to record TCM non-stop over the next 24 hours.