Today's movie, 4D Man (1959), is by no means a great sci-fi movie, but it has a Silver Age comics vibe that I find appealing. 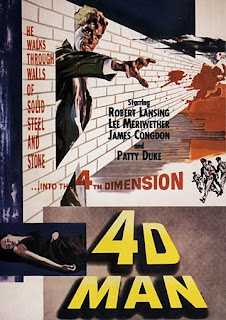 This movie takes forever to get going, but once it does, it's pretty good. The movie follows two brother scientists: Tony and Scott Wilson(James Congdon and Robert Lansing, respectively). Tony is trying to perfect a way to force two different objects to merge with one another, like pushing a wooden dowel through a steel plate. He believes this is a natural process, where, over time, two objects in constant contact with one another will eventually merge together. When his experiment fails, the entire lab building burns down, and he loses his job. He then goes to visit his brother Scott, who works for a research facility associated with the US military. Scott is trying to develop "cargonite," an impenetrable metal.

The first half of the movie deals with the brothers' personal relationships and their scientific work, and it feels more like a soap opera than a sci-fi movie. While both brothers are trying to deal with penetrable and impenetrable metals, they are both also trying to penetrate fellow scientist Linda Davis, played by Lee "Catwoman" Meriwether in her first film role. Linda is dating Scott, but when Tony arrives, she looks him over like they are the only two people on earth with compatible genetalia.

Here's a good example of how Linda totally cockteases Tony right in front of her boyfriend:

Tony has a history of stealing his brother's girls, so he's at first hesitant to take up with Linda. However, there is an obvious sexual metaphor in the research the two brothers conduct, and so Tony gives in to his natural impulses.

The close proximity to cargonite, however, causes Scott to have increased brain waves or something like that, and he discovers that he can do with his mind what Tony is trying to do with machines: he can pass other objects, as well has himself through solid objects. However, there is a catch: doing so causes him to age rapidly. Tony determines that this is because Scott is speeding up a natural process that causes all matter to merge over time, so when Scott enters the fourth dimension to do this, he saps some of his own life energy.

This movie provides an interesting twist on expectations: Tony is the irresponsible scientist who often blows shit up, while Scott is a more traditional, responsible scientist, though occasionally prone to personal risk. We expect Tony to become the victim of science gone awry, but it ends up being Scott.

When he first develops his powers, Scott starts by taking mail out of a mailbox. Then he steals fruit from a closed grocer and thinks about grabbing some jewelry before putting it back. However, the scene ends with him eyeballing a bank. And this is where things start to go bad for Scott.

He then finds another side effect of his powers: if he passes his hand through another human, that person ends up dying of old age. But the person's life energy then transfers to Scott, reversing the aging process. So, Scott becomes a kind of energy vampire who can also turn immaterial at will.

Once the movie gets rolling, it has a cool, Silver Age comics vibe, with science causing Scott to become a super-villain instead of a hero. The fear of science gone awry feels like it's straight out of an EC or Atlas comic of the same period. The movie also has a cool jazz score by Ralph Carmichael that is largely incongruous with the movie itself, but once it kicks in during the opening credits, it's infectious. Also, look for Patty Duke as a young girl who tries to befriend Scott because she thinks he's a hobo, which we all know is a good idea.
Posted by Dr. K at 1:05 PM

Yes, it was an interesting movie, and it always throws me off when the "responsible" brother is the one who goes bad. But I really liked that jazz score!