Halloween Countdown Day 4: Houdini in The Man from Beyond!

If I had to make a list of the most awesome people in human history, Harry Houdini would easily be in the top five. So, when Kino put out a DVD set of Houdini's surviving movies, I thought for sure that these would be the greatest films ever made. 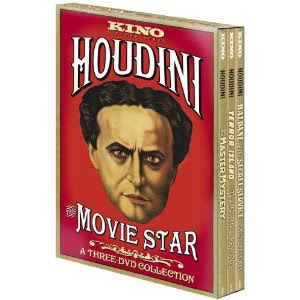 However, other than the serial he made called "The Master Mystery"--which is just freaking incredible and has Houdini fighting a robot--the movies Houdini made just aren't very good. And they are all not very good for fundamentally similar reasons: Houdini doesn't escape from enough shit.

Now, it would seem that, if you are a master showman like Houdini, and you are making movies with a considerable amount of creative control, then you would want to give the audience exactly what they want from a Houdini movie. And what might audiences want to see Houdini do? Make out with a chick? No. Emote? Not really.

What they really want is to see Houdini escape from shit. Unfortunately, he only does that a couple of times per movie, when he should be escaping from something every five minutes. (This is probably why the serial he did is so good: each episode is structured around a cliffhanger that involves Houdini escaping from some trap. So, every 15 minutes or so, he has to be handcuffed or locked in a trunk or strapped to an electric chair something like that.)

A case in point: The Man from Beyond (1922), a melodramatic mystery with supernatural overtones. 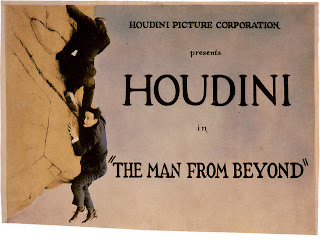 On the surface, The Man from Beyond sounds like it should be the most awesome movie ever. Houdini plays Howard Hillary, a man found frozen on a shipwrecked vessel in the Arctic 100 years after his ship disappears. Imagine if Houdini were Captain America, and you get a good sense of just how much potential this movie misses out on.

Hillary is discovered by the final surviving members of an Arctic expedition--Dr. Gregory Sinclair and Francois Duval--as they are on the verge of starvation and death from exposure. Duval comes across the mysterious ship stuck in a glacier, with a perfectly preserved human frozen in ice. While Dr. Sinclair studies the ship's logs to find out its story, the Frenchman chops the body out of the ice as a potential food source. But that plan disappears once Hillary thaws and proves to be still alive.

We then get a flashback to 1820, where Hillary is first mate on a ship. The passengers on the ship include a young woman named Felice, with whom Hillary falls in love. The captain of the ship, however, is out to get his first mate, and he throws Hillary in the brig when the ship is wrecked in a terrible storm

Hillary, Sinclair, and Duval return to civilization just in time for the wedding of Sinclair's neice to Dr. Trent, a scientist and partner with the neice's father, Professor Strange. It turns out that the neice is also named Felice, and she's the spitting image of Hillary's lost love. Hillary breaks up the wedding with his sad story, and Felice decides to delay her nuptials, much to Trent's chagrin. Hillary becomes convinced that she is his love, reincarnated.

And all this is really where The Man from Beyond goes wrong. Instead of making an action-packed adventure, Houdini, who also wrote the script, oddly decided to make a supernatural melodrama--one that exceeds the limits of what little acting ability the performer had. Houdini also seemed more interested in making some kind of pro-Spiritualist propaganda about the validity of reincarnation, as the movie repeatedly presents itself as "evidence" that such a phenomenon is real.

In order to give Houdini some Houdini things to do, a mystery is introduced: Felice's father had been on the Arctic expedition until called away by a cable from Trent informing him that his daughter was sick. However, Trent denies sending the cable, and no one has seen Prof. Strange in a year. It immediately becomes clear that Trent is one shady dude, and he uses Duval to set up a frame job on Hillary for the murder of Prof. Strange.

The professor, however, is being held prisoner in Trent's dungeon, where the evil scientist also performs experiments on animals.

Meanwhile, Hillary gets taken away to an insane asylum, where he is put through some elaborate torture. He is tied up and strapped to the floor with sheets, while water pours down from above. Hillary wriggles out of the sheets, and then uses them as a rope ladder to escape the hospital. This ends up, unfortunately, being the only Houdini-style escape he performs in the entire movie.

Later, Trent tries to kidnap Felice in order to drug her and then force her into marriage, but Hillary comes to the rescue, and fisticuffs ensue. Felice escapes by getting into a canoe, which then careens out of control toward Niagara Falls. Hillary dives into the river in what turns out to be the movie's centerpiece: a dramatic river rescue.

Behind the scenes, this rescue--inspired by a river rescue in D. W. Griffith's Way Down East--proved to be potentially dangerous for Houdini. He used 8 cameras to capture the rescue in one take, and he even shot an alternative ending for the movie in case he was injured or killed in the rescue. Houdini even offered $5,000 to any filmmaker who could make a more thrilling scene.

However, the rescue as seen in the movie is not that thrilling, perhaps due to a more jaded contemporary perspective. There is, though, a striking similarity between this scene and a similar river rescue in Buster Keaton's Our Hospitality, released a year after Houdini's film.

I'd always understood Keaton's scene to be inspired by Way Down East, but after seeing The Man from Beyond, I wonder if Keaton wasn't taking on Houdini's public challenge to make a more thrilling scene. Keaton's is definitely better from both technical and dramatic standpoints, building up several short obstacles before getting to the big rope stunt at the end. Keaton also cutely flips the script on the earlier, similar scenes by first having the male character in need of rescue. But there are enough similar shots between the two to make me think that Keaton may have had Houdini in mind when constructing this scene.

The Man from Beyond ends with a final nod toward the veracity of reincarnation. The scientists Sinclair (who, by the way, was played by Erwin Connelly, an actor who later worked with Keaton) and Strange declare that reincarnation is definitely possible. Hillary even hands Felice a copy of Sir Arthur Conan Doyle's Spiritualist tract, "The New Revelation," just as we see a ghostly image of the old Felice inhabit the body of the new one.

The publicity for the film announced, in bold hyperbole not uncommon for Houdini, "It is as much unlike the average picture as Houdini himself is unlike the average man." (This really should be the tagline for the next George Clooney movie.) It also explained that "the story is essentially a love story, with the added feature of unparalleled thrills." Unfortunately, the film spends too much time on the love story, and the thrills are more than paralleled. But, like all the Houdini films, it does have historical value that makes it worth seeing, even if it steers too far away from what made Houdini's live performances, as well as The Master Mystery, such huge successes.
Posted by Dr. K at 2:32 PM

Thanks for that. I've been curious about that set, and you've described what I'd anticipated; a great serial and mediocre everything else. I have no doubt I'll end up getting this...eventually.