When I begin these Halloween Countdowns, I usually start with around 4 movies that I want to cover, and then I just go kind of stream-of-consciousness style from there, as one movie will remind me of another, and so on.

And it seems like, for me, all roads lead back to Hammer Studios. After covering Girly last week, I was reminded of some other Freddie Francis movies that I hadn't covered, and that led me to today's film, Paranoiac (1963), directed by Francis and written by the great Jimmy Sangster, who was responsible for writing some of the earliest Hammer horror classics.

Next year, I should really do Hammer all month. 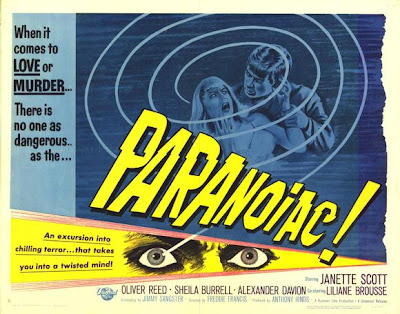 Paranoiac is more of a modern gothic mystery with a horror undertone than it is a typical Hammer horror film. Beautifully shot in black and white by Francis, who had won an Oscar a few years previously for the cinematography to Sons and Lovers, this film looks amazing, with a strong, atmospheric contrast between light and dark that lends to the film's mood.

The Ashbys are a disfunctional, upper-class British family. Eleven years earlier, the two parents were killed in a plane crash, leaving three orphaned children in the care of their aunt Harriet. Soon after, the eldest son, Tony, commits suicide, leaving Simon (Oliver Reed) and Eleanor (Janette "Day of the Triffids" Scott) as the sole heirs to the Ashby estate.

When the movie opens, Simon is less than one month away from coming into the fortune, which he will need, as he has long expended his budget on booze, and the local liquor shops will no longer cover him. This role may not have been a stretch for Oliver Reed, but he is perfect as the spoiled, dangerously unstable, and unapologetically nasty young man. This is an early film for Reed, but everything that's great about his screen performances is here--the charisma and physical energy that are both just teetering on the edge of restraint.

Eleanor, meanwhile, appears to be going mad, and has herself been unstable since her beloved brother's suicide. At the beginning of the movie, however, she starts to see what she thinks are visions of Tony, first at church and later outside their home.

It turns out that these aren't visions, and a man claiming to be the long-lost Tony Ashby (Alexander Davion) shows up to claim his inheritance.

This feels like a fairly standard mystery plot, but Sangster takes it in some surprising directions. First, he reveals fairly quickly to the audience that Tony is indeed a fake--a grifter hired by the Ashby lawyer's son to try to scam the family out of their fortune. Also, a romance develops between fake Tony and Eleanor, yet the movie pretty much suspends the idea that this is a romance between a mentally unstable woman and a man who is identical to her dead brother.

And that raises one of the most fascinating elements of this movie. Sangster and Francis create a world for the Ashbys in which, by virtue of their wealth, they get to create their own moral system, though one that has been difficult to maintain. Simon has become more and more dissolute over the years, endangering himself and others in his decline; Eleanor has deteriorated mentally; and Aunt Harriet has tried desperately to maintain the status quo. Even fake Tony, whose real name is never revealed, should hardly get to function as the hero of the story, though his intrusion into the family tears down that status quo once and for all. And once it starts to go, the movie transitions from mystery to horror.

At 80 minutes, this is a tight movie, filled with solid performances across the board, a smart plot, and beautiful black-and-white cinematography. However, I would add that the film's sensational title is a bit inappropriate for such an intense but cerebral thriller.
Posted by Dr. K at 2:03 PM