During my past Halloween Countdowns, I've covered several films from British director Freddie Francis. Francis had a stellar career as a cinematographer, earning an Oscar for his work on Sons and Lovers, before becoming a director, where he did most of his best work on horror films for UK companies Hammer and Amicus.

Perhaps his best film, however, has been very hard to find until its release this year on DVD, with little fanfare. Girly (known in the UK as Mumsy, Nanny, Sonny & Girly) is a strange, wonderful black comedy that barely made it into theaters in 1970. 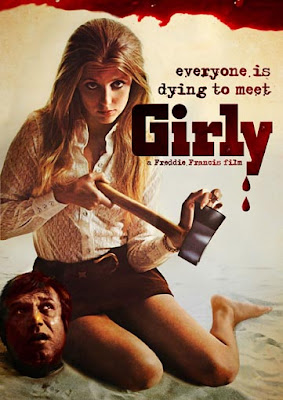 The poster above (still oddly used for the DVD) reveals one of the reasons for its failure upon initial release in the US. With the name change and the blood-dripping poster, the film was marketed as a straight-up horror movie, completely eliding the film's dark comic elements. In fact, the woman in the picture isn't even Vanessa Howard, the actress who plays the title character; instead, it's some model hired to attract a horror-movie audience.

But anybody coming to Girly for the first time is in for a treat. Many contemporary critics describe the film as unique and ahead of its time, but I rather see it as a perfect amalgamation of several significant elements circulating in UK pop culture at the time. It has a surreal quality that permeates many episodes of The Prisoner and The Avengers, plus the darkly parodic attack on the British class structure and values that one sees most prominently in something like A Clockwork Orange. In addition, Francis brings to the film a visual style that's in keeping with his work for Hammer and Amicus.

The four title characters represent a bizarrely happy, oddly functional upper-class family. The two children--Sonny (Howard Trevor) and Girly--exist in a state of blissful arrested development: they are clearly in their late-teens or early twenties, though they dress in sixth-form school uniforms and spend their time playing childish games. Their biggest game involes the recruiting of new friends to take home and serve as their playmates. The film opens with the recruitment of just such a friend: a bum asleep on a park bench, whom Girly lures home by plying him with alcohol. At home, Mumsy and Nanny prepare a room in preparation for the new guest. However, when the "new friend" refuses to play "Ring Around the Rosie," he quickly learns the importance of rules, the most significant being that one must always play the game. As Mumsy says, "If you don't have rules, where are you?" Unfortunately, the new friend didn't adhere to the rules quickly enough, and Girly decapitates him while reciting "Oranges and Lemons."

This opening sets up the structure of the family: Mumsy makes the rules, Nanny assists Mumsy with household tasks, and the two children remain in a constant state of play, where everything is a game with a capricious set of rules. Sonny even records most of the games on film, highlighting the fact that they exist in a continuous, never-ending performance.

But with the latest new friend so short lived, Sonny and Girly must find another, and they do so with a drunk swinger (Michael Bryant) and his equally drunk girlfriend. The girlfriend doesn't last long in the game, however, and the new friend is kept in line with threats of blackmail about the girlfriend's fate.

New Friend quickly learns the rules of the house, and after a failed attempt at escape, he starts to play the game with a surprising level of enjoyment. He also, however, works to maneuver things in his favor by playing off the sexual jealousy among the three women in the house.

Girly is a truly exceptional black comedy: creepy, funny, and unsettling all at once. Howard Trevor--who, according to IMDB, never made another movie--makes Sonny a terrifying figure whose idea of fun involves a high level of sadism. And Vanessa Howard as Girly alternates from childish charm and coquettish flirting to psychotic evil effectively. Of all the family members, she allows herself to slip out of the performance occasionally to let New Friend know the seriousness of his situation. Also, Michael Bryant makes New Friend a kind of amoral survivor who doesn't quite realize what a dangerous game he's playing when he starts to toy with the three women sexually.

Amazingly, this movie is available through Netflix Watch Instantly, and I can't recommend it enough. Since seeing it the first time, I've moved it high up my list of cult movies I watch in regular rotation.

The preview below gives a good sense of what this movie is like, though it does give away a couple of key spoilers. However, it does include one of my favorite bits, where Girly introduces Sonny to "Tony Chestnut."