Every Halloween season, I try to watch a bunch of Hammer horror films, and I feel that's especially appropriate this year, as Hammer Productions has returned with Let Me In.

I'm curious to see where Hammer goes with its revival, but in the meantime, let's look at one of the classics produced by the company in the past. 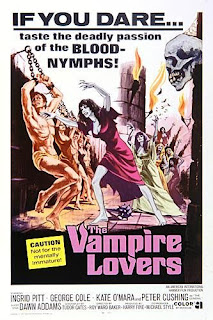 (I love how this poster--which has nothing to do with the actual movie, by the way--provides the warning "Not for the mentally immature!" In other words, "Don't giggle at the sexy lesbian parts!")

One of the more notorious Hammer productions was The Vampire Lovers (1970), directed by Roy Ward Baker and based on Sheridan Le Fanu's great early vampire novel, Carmilla (1872). Like Hammer's other adaptations, this plays fast and loose with its source material, but it remains a solid vampire movie from a time when Hammer films were starting to slip in quality.

In the late 60s and early 70s, Hammer went looking for other source material, as the main franchises--Dracula and Frankenstein--were wearing thin. Le Fanu's Carmilla seems like a logical choice, especially as the story's lesbian undertones could be exploited by a studio that was further pushing the boundaries of sex and violence in its movies.

The film opens in a typical Hammer milieu: a gothic castle surrounded by a fog-strewn moor. Voice-over narration from Baron Hartog explains the situation--he has dedicated his life to destroying the Karnsteins, a family of vampires that was responsible for his sister's death. He also explains the vampire rules for this story, in that vampires can only be killed by a stake through the heart or decapitation. He then proves this by slicing the head off of a hot blond vampire who is trying to seduce him.

The importance of this opening won't be clear, however, until much later in the movie, as Baron Hartog pretty much disappears until the end.

Years later, General von Spielsdorf (Peter Cushing, who cuts a fine figure in a Prussian officer's uniform) holds a fancy ball, which is attended by a mysterious Countess (Dawn Addams) and her daughter, Marcilla (Ingrid Pitt). However, soon after their arrival, the Countess is called away by a pale man in black, who gives her some news that requires her to leave immediately. The General offers to let Marcilla stay at his estate and serve as a companion for his daughter, Laura (Pippa Steele), until the Countess can return.

This whole scenario turns out to be a scam orchestrated by the Countess so Marcilla can infiltrate the household and feed on young Laura. Over the course of several evenings, Marcilla comes to Laura in the form of a cat, and then proceeds to feed from her breast. Every night, Laura wakes up screaming while also getting progressively weaker. In typical vampire story fashion, the General and the local doctor chalks the weakness up to anemia, and both miss the supernatural explanation.

Laura dies, and Marcilla and the Countess take their scam back on the road, working their way into the Morton house, with their young daughter, Emma (Madeline Smith). When Mr. Morton goes away, Marcilla, now known as "Carmilla," has the run of the house, seducing both Emma and her attractive governess (Kate O'Mara). The film generates much of its tension from Carmilla savvily overcoming obstacles and potential exposure before her vampire identity is finally revealed. In the meantime, though, Ingrid Pitt and Madeline Smith get down to some sexy times.

Interestingly, the plot of this movie follows that of Bram Stoker's Dracula even better than any of the other Hammer Dracula movies. In particular, when Morton becomes aware of his daughter's plight, he enlists the help of the General and Laura's boyfriend, Carl (Jon Finch, in his first film role). The General and Carl have also tracked down an aged Baron Hartog in order to take advantage of his expertise in killing Karnstein vampires. So, like Dracula, the male characters band together to combat the danger created by the female vampire. In general, the movie raises a few interesting gender issues.

The movie follows its own internal logic well enough, though it doesn't quite match the standard vampire rules. Carmilla travels during the daytime frequently, though she does have some photosensitivity, and we see her reflection in mirrors quite often. Also, the vampires don't reproduce through biting, but instead only feed. The cross and garlic still work, though, as well as staking and decapitation.

Though the film comes to a satisfying conclusion, a couple of loose ends are left dangling. We never really learn the true role of the Countess, for one. Baron Hartog claims that he killed all the Karnstein vampires but one--Carmilla--so the Countess is probably not Carmilla's real mother, and it's not clear if she's a vampire. Also, the mysterious, pale man in black appears to watch all the events of the film unfold, but we never find out who he is or what purpose he serves.

In the end, The Vampire Lovers is a solid vampire movie with a lesbian twist. It pushes the envelope of sex and violence compared to earlier Hammer films, but it looks positively constrained alongside those of the following years. Ingrid Pitt stands out as one of the great female vampires in Hammer history, and Madeline Smith makes a nice transformation from sweet innocent to willing companion to physical wreck in the course of the film. However, while the movie tends to focus on the female characters, great actors like Peter Cushing and Jon Finch are underused. And like a lot of Hammer films, it has a rather weak second act, but it is otherwise stylish and well-made.

Here is the trailer for The Vampire Lovers:

Ingrid Pitt would return to Hammer films the following year in Countess Dracula, the movie I will be covering tomorrow.
Posted by Dr. K at 8:39 PM

What exactly do you mean by "standard vampire rules"? Are you talking about the rules according to 20th century vampire lore or what exactly?

I don't know if there are any "standard vampire rules." Different countries and cultures had differences in their folklore and mythologies. And the idea that vampires disintegrate in sunlight was invented by the movies, not in folklore or legends.