As I've mentioned before, I like to watch bad horror movies, but I do so in order to find that nugget of creativity or originality--those points when, despite a lack of talent or a series of bad choices that permeate the rest of the film, I'm genuinely surprised. That moment where I think to myself, "No matter how bad this movie is, I'm glad it exists for this reason alone."

That is definitely the case with Sugar Hill (1974, not to be mistaken for the Wesley Snipes movie of the same name), a blaxploitation zombie horror film that varies wildly from amateurish to inventive. 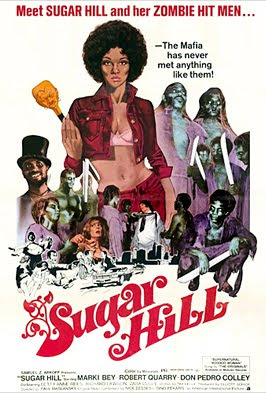 Sugar Hill deserves to exist just on the virtue of its premise alone: a fashion photographer whose name is actually "Sugar Hill" (Marki Bey, who looks a lot like a disco-era Vivica A. Fox) seeks revenge on the white gangsters who murdered her man, Langston. Instead of going the Pam Grier route and doing the job solo, she gets supernatural help from top voodoo figure Baron Samedi (Don Pedro Colley) and his army of zombies, all of whom are re-animated slaves.

So, there is considerable satisfaction in seeing a horde of zombie slaves killing a bunch of racist white gangsters, and that alone goes far to make up for the film's many faults. But each set piece, where Sugar picks off the gangsters one by one, is incredibly inventive and, most of all, fun. Sugar wears a sexy white jumpsuit for each killing that could almost qualify as a superhero costume, and Don Pedro Colley is clearly having a good time as Baron Samedi (he even steers away from the booming, otherworldy, Geoffrey Holder-style voice that one might expect for the character). These scenes appear with enough frequency--Sugar has a lot of revenge to get--that the weaker, in-between moments don't feel so bad.

For one gangster, Sugar has the zombies feed him to some hungry pigs. As he falls into the pen, Sugar says to the pigs, "I hope you like white trash." This is a great one-liner, and the movie does not hide its glee at the comeuppance these racists received. Another henchman is attacked by a disembodied chicken foot, which is also pretty awesome.

The police investigation that punctuates these murder scenes is otherwise terrible: the acting feels amateurish, and the investigating detective, Valentine (Richard Lawson), seems to come up with leads off-screen, as we don't quite know why he suspects Sugar in these murders. But this sub-plot is abruptly and unceremoniously dropped from the film.

The climactic scene, where Sugar and the Baron go after Morgan (Robert Quarry), the mob boss, is disappointing in light of the creativity shown elsewhere, and the film's abrupt ending, where the contract between Sugar and the Baron is fulfilled, was not what I expected to happen. Nonetheless, this movie has enough occasional fun moments that make it worthwhile.
Posted by Dr. K at 8:11 PM