Halloween Countdown Day 13: Let Me In

After watching Let the Right One In on Monday, I decided to check out the English-language remake, Let Me In. I had a free ticket to the local theater that was about to expire, and I figured that if I went to the early matinee on a Wednesday, I would have a good chance of a private screening.

Alas, that didn't happen. In fact, in a huge, virtually empty theater, some dude with a huge bucket of popcorn and a giant soda decided to sit in the seat directly behind me for some reason. I'm guessing this guy is a 12:00 Wednesday regular, and he was passionately tied to that one perfect seat in the theater. 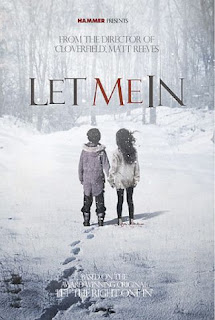 As most reviews of Let Me In have noted, the film is surprisingly faithful to the original, and if I were to have seen it on its own terms, I would have considered it an innovative, challenging horror movie. Director Matt Reeves, who also adapted the screenplay, pretty much hits the major notes of the original, with only subtle differences and rare improvement.

In the Swedish original, we get subplots involving the lives of various neighbors in the apartment complex where Eli and Oskar live. This ramps up the emotional impact when Eli kills one of the neighbors and later turns another into a vampire. The audience feels the impact of Eli's presence on the larger community, and that creates a complex ambivalence for the vampire: we understand that she needs to feed, but we also feel something for her victims. This is especially effective when Ginia, the woman Eli accidentally turns into a vampire, chooses to end her life when she discovers what she's become.

In the remake, we only see these neighbors as subjects of Owen's (the film's version of Oskar) voyeurism. The characters are not even named, and the impact is reduced when Abby (Eli) accidentally transforms the woman. Then, the woman's death comes by accident rather than choice. We get a different sense of the impact of Abby on the community, but it also resonates less. Ginia's death is tragic, but it also reminds us that the life of a vampire is itself horrible.

The new version has the great Richard Jenkins as Abby's "father"--the man who goes out and obtains blood for Abby's survival. In Jenkins's performance, this man is at the end of his road, making sloppy mistakes because he has finally reached his limit in a job that we assume he has been doing for decades. One of the few improvements Reeves makes on the original occurs in Jenkins's bungled attempt to kill one of the bullies that besets Owen. Reeves places the camera inside the car that Jenkins tries to escape in when he's caught, and the long take used traps us in this confined space as things go horribly wrong.

As I mentioned in Monday's post, the original film uses a more subdued style that heightens the film's tension in surprising ways. Reeves takes a more conventional route in terms of style, and the impact is again reduced. In one scene, a police detective (Elias Koteas, in a role added for this movie) searches through Abby's apartment. As the tension increases, a wind-up toy drops on the floor, providing a sudden, cheap shock through a red herring that has become a cliche in horror movies. Then, as Koteas approaches the bathroom door, behind which Abby sleeps, the music ratchets up to prepare the audience for another shock to come. In fact, the musical score is pervasive throughout the movie, and I wish Reeves had trusted in silence more. But this particular scene highlights the film's major problem: while it's focus on the relationship between Abby and Owen feels different from other horror movies, it gets its shocks in a highly conventional, and occasionally cliched, way.

The remake also deals less with Abby's gender-ambiguity, though the idea is definitely raised. However, it does explore more overtly something that is only subtly touched on in the original. We get the sense that Owen is not Abby's first "friend" of this sort, and that Richard Jenkins's character had been in Owen's shoes decades earlier. That lends a more intensely tragic air to the film, as we see in Jenkins the end of the inevitable path that Owen is just beginning.

Let Me In is a better than average horror movie, mainly because Matt Reeves smartly adheres to the original's plot. However, I wish Reeves had been bolder in his stylistic choices, matching the plot with a style that relied less on convention and cliche.

Also, I'd like to add that Let Me In is the first big release from the revived Hammer brand, and I got a kick out of seeing the Hammer logo at the beginning of the film. I'm curious to see what the future holds for this brand.