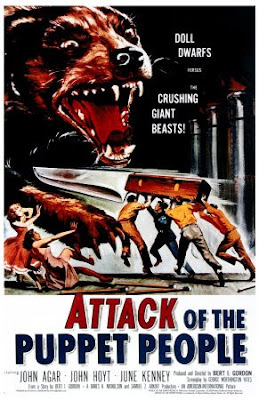 Warning: At no point in this movie do little people try to shank a dog with a knife!

The first film in this year's Halloween Countdown is American International Pictures' Attack of the Puppet People (1958), directed by Bert I. Gordon. Like many AIP films, this one has a sensationalized, misleading title. The title makes it sound like the Puppet People are the heroes of this film--the victims of mad dollmaker, Mr. Franz (John Hoyt).

The film opens outside the office of "Dolls Incorporated," which, surprisingly, is a company that makes toy dolls for children. A troop of Girl Scouts arrives for a tour, and some become fascinated with a case full of very life-like dolls, but these dolls can't be touched!

Soon, young Sally Reynolds (June Kenny) shows up at the office with a want ad for a new job: "General office girl wanted. Easy work, good pay." Despite the fact that this sounds like the perfect job, Sally is the only applicant. However, she quickly gets skeeved out by Mr. Franz, the peculiar dollmaker who treats his dolls like people. Sally claims she has absolutely no experience, but Franz insists that she's perfect for the job because she's single and has no family, which were not qualifications listed in the ad. Though she has misgivings, Sally takes the job.

Franz also hires a new assistant, Bob Westley, played by the great John Agar. The place suddenly becomes the doll company version of Mad Men, with Bob constantly sexually harrassing Sally until she finally relents and goes on a date with him because she really had no legal recourse at the time.

Bob makes an ironic choice for their first date: a drive-in theater to go see Bert I. Gordon's masterpiece, The Amazing Colossal Man (1957). This is a nice metatextual touch here, not just to another Gordon movie that uses the same special effects, but also to the drive-in theater experience itself, which is the way many audiences would have seen this film in 1958. And just as Bob and Sally start making out, the Colossal Man shouts, "I'm not growing! You're shrinking!"

Meanwhile, we learn that many of the previous employees of Dolls Incorporated, along with the local mailman, have disappeared mysteriously. Franz also reveals to his longtime puppeteer friend, Emil, that his wife left him years ago, taking off with an acrobat at the circus where they all worked, and where Franz was once the world's greatest puppeteer. Franz clearly has abandonment issues, and we begin to understand the motive behind his madness: whenever one of his employees threatens to leave, he turns them into dolls so that he can then completely control their lives.

Bob and Sally get engaged very quickly, but the day they are supposed to go off together, Bob disappears. Franz tells her that Bob left for St. Louis and abandoned her. This doesn't wash with Sally, though, and she goes to the police to report him missing. The detective, Sgt. Patterson, has seen all this before, and he knows that Bob has taken a powder.

Sally has too much information about other recent disappearances, however, for the detective to ignore her, so he goes along with her to investigate Dolls Incorporated. There, Sally points out the very life-like Bob doll that Franz now has, and she claims that the doll is really Bob shrunk down to GI Joe size. In order to prove it is actually a doll, Franz drops a match in the doll's case, making it no longer MIB.

The detective leaves, but Franz has decided that Sally cannot be allowed to run around, so he uses some kind of loud, humming machine to shrink her down to doll size.

Creepily, Franz has not yet worked out how to shrink his victims' clothes with them, and Sally is left wearing a napkin until he can provide her with a creepy doll dress.

Franz then goes into an extensive explanation about why the life of his doll is preferable to a normal life: no more bills, taxes, or work. Most of the time is spent sleeping in a kind of suspended animation in a doll case. This actually sounds like a pretty good deal, especially since they would get to play with cool huge stuff.

Franz also explains how his whole shrinking machine works, which has something to do with sound frequencies and the principle of a slide projector. This is one of the things I love about these 50s sci-fi movies--their commitment to making this crazy shit sound like real science.

In addition to Sally and Bob, Franz also opens up the packages on a couple of other puppet people, including his former receptionist, a Marine, and a couple of teeny boppers.

At this point, the special effects really start to kick in, and Gordon does a nice job within his low-budget limitations. The puppet people have to deal with a vicious dog, a rat, and even puppets. The giant props are also pretty cool, including a giant phone, a paper airplane, and a beef stew tin used for a bubble bath.

There is also a great, disturbing scene where a bratty little girl invites herself into Franz's office to get her broken doll fixed. It turns out her doll was playing in traffic despite her warnings against it. Franz, who has had his own experience with unruly dolls, advises her to spank her doll. The girl is ahead of this game, however--she's tried the spanking, and it just doesn't work.

The film's finale involves Franz forcing the puppet people to perform in a marionette show of Dr, Jekyll and Mr. Hyde, which is also pretty cool.

Though this is a pretty typical low-budget Bert I. Gordon production, much of its strength lies in John Hoyt's performance as Mr. Franz. Hoyt makes the character oddly sympathetic, which was not typical for this type of mad scientist role. He screams out at the end, "Don't leave me! I'll be alone!" and we actually feel for him. He's not trying to take over the world or seek revenge--he just doesn't want to be abandoned again. It's a nice turn on the viewer's expectations.

Attack of the Puppet People is available on DVD, and it can also be watched on Hulu. Here is the awesome trailer, which, as usual, makes the film seem much more action-packed than it is.