This installment of Blackhawk Wingsdays doesn't have much to do with Halloween, unless you consider ridiculous costumes to be Halloween-related. Nonetheless, I wanted to feature a story in which the team actually did something that vaguely related to their various skillsets, as explained in the previous post. This one comes from Blackhawk 112 (reprinted in Showcase Presents: Blackhawk vol. 1) from May 1957, writer unknown, but drawn by Dick Dillin and Sheldon Moldoff.

This story, titled "The Crimson Vultures," follows a very common trope in the Blackhawk series: the Blackhawks fight an evenly matched but evil team of doppelgangers. In fact, this trope was used with a distaff twist just two issues prior to this story, as discussed here, and Howard Chaykin even used it in his revival miniseries from the late 1980s.

In "The Crimson Vultures," the Blackhawks are called in when a bunch of mysterious robberies occur where large objects, like trains and armored cars, seemingly disappear. The team soon figures out--as they should have right away, if they were really on the ball--that these large objects are being stolen via a giant flying bridge:

The flying bridge is being operated by The Crimson Vultures, a team of ridiculously costumed badguys who are each evenly matched with another member of the Blackhawks. For example, one is a sharp shooter, like Hendrickson: 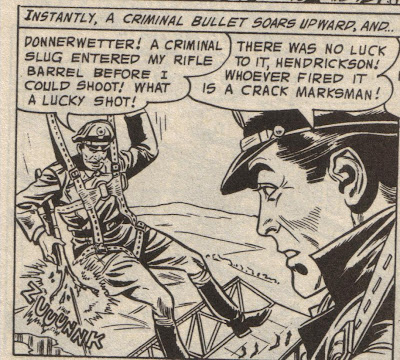 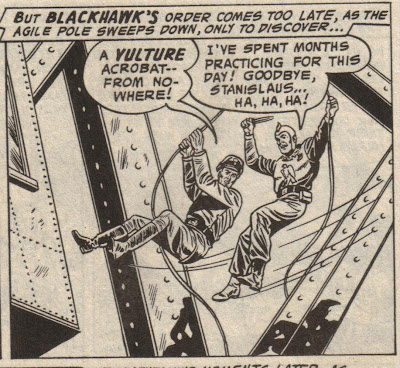 In fact, they are so evenly matched, that they are only known by a single corresponding initial, plus they also duplicate their opponents' accents, as we can see with Hendrickson's doppelganger, "H": 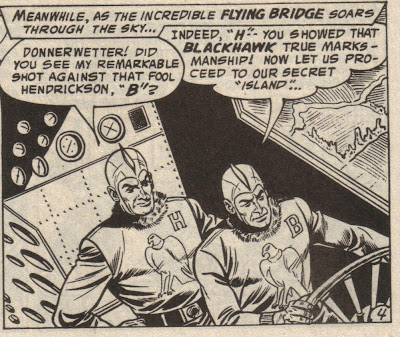 That requirement must have really narrowed down the job applicant pool.

Also, in their meeting room, the Vultures have to sit by a bust of their corresponding Blackhawk. 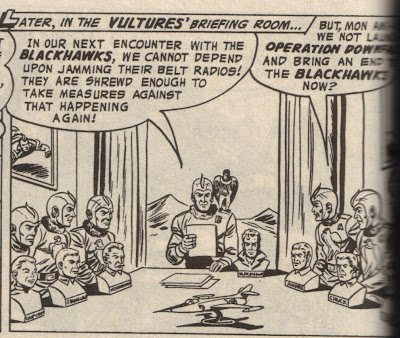 Unfortunately, we don't get to see how the other Vultures oppose or negate the rest of the Blackhawks. I would expect, for example, that Chop-Chop's doppelganger would be an even worse racial stereotype, or "A" would always be cockblocking Andre. Olaf's doesn't even appear in the above panel, but I imagine he would have to be barely able to feed himself.

We do, however, get to see the Vulture's mascot, "Crimson," take on the Blackhawk's hawk, "Blackie." 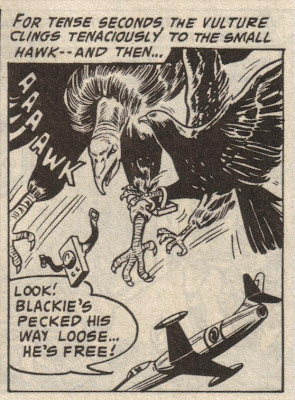 I don't understand why the vulture isn't named "Reddie," but then, I'm not the unknown writer who wasn't even given credit on this story.

The transmitter falling from Blackie's leg will become an important plot point later.

The Vultures make one final attempt to defeating the Blackhawks by tricking them onto the flying bridge and then trapping them in place with some kind of electromagnetic force or something.

Surprisingly, the Blackhawks are prepared with rubberized boots to negate the electricity, I guess, and punching ensues. 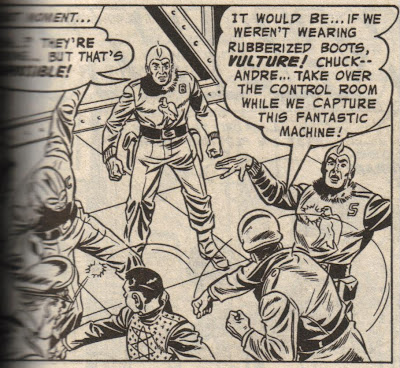 Rather than face defeat, the Vulture's leader, "B" (again, why isn't he just called "Crimson Vulture" if he is really Blackhawk's doppelganger?), decides it's better to die and take everyone with him. But it turns out he wasn't the master strategist he thought he was, as he missed one crucial detail about the Blackhawks: 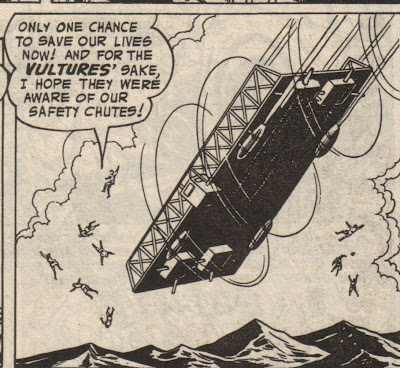 They are always ready to screw the pooch if necessary.

Even though all the Vultures went down with the flying bridge, there are still a few loose ends to wrap up. For example, Blackie needs to totally fuck up the vulture. Also, we need to get the explanation of how the Blackhawks knew the Vultures' plans: 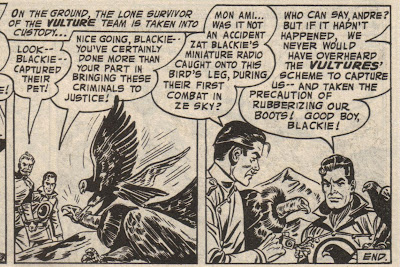 This is just one in a series of stories where Blackie turns out to be the smartest member of the team. We'll see this coming up much more often later.

Next week, I'm going to start featuring Blackhawk stories that tie in more to the Halloween Countdown!