Kane, who was an intensive autodidact, taught himself many of the classics and was particularly fond of opera. "Comes a Warrior," therefore, is a bit of a riff on Beowulf and Wagner's The Ring cycle, which Kane would adapt later in his career, with the help of Roy Thomas on scripts. 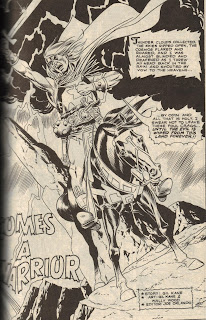 The story opens with a young Nordic warrior named "Rangarry" (short for "Rangarry Ran Ross") brandishing a sword through a lightning storm, which can't possibly be safe. Rangarry has been riding around for years looking for adventure that would help him build his reputation as a warrior. If it's taken him years to do this, he's either very picky about what constitutes a worthy adventure, or he's just not looking in the right place. I mean, I've technically spent "years" looking for the perfect Philly cheese steak, but my search has been limited to a couple of places in South Carolina. I wouldn't necessarily call that a "quest."

Rangarry arrives in a small, deserted village, where he senses the danger that he's longed for. Suddenly, a man attacks him, claiming the warrior is a demon in disguise. 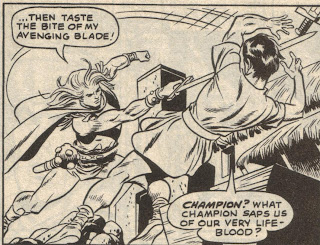 After being offered a taste of Rangarry's blade, the attacker realizes he's got things wrong, and he goes on to explain that the village was devastated in an attack by an evil dragon and its "foul spawn." 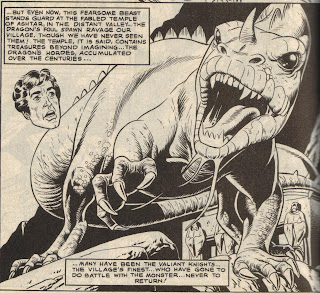 The dragon looks a lot like the Basilisk that Kane and Wood drew in the story I covered from issue 184 last week.

Eager to get his adventuring out of the way, Rangarry sets up an elaborate trap for the dragon. Then, in an awesome full-page spread, he gets the dragon to follow him. 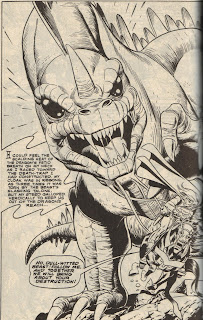 The dragon falls into the trap, and Rangarry puts the beast away with a well-placed sword to the neck. 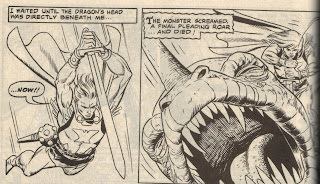 However, in the usual House of Mystery fashion, there is an ironic twist coming. It turns out, despite appearances, the dragon was a good guy, guarding a temple that was imprisoning demons and keeping them out of the human world. The dude who attacked Rangarry earlier was one of these demons who had managed to sneak out, and now all his bretheren are freed. 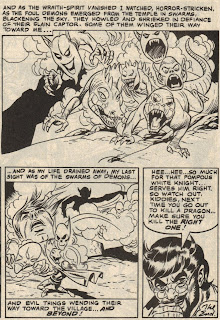 "Comes a Warrior" also serves as a set-up for the next story in this issue, which happens to be one of my favorite Gil Kane stories of all time. This, I'll be covering next week!
Posted by Dr. K at 10:55 AM