In last week's story, I showed you how the Blackhawks took on the somewhat perplexing threat of "The Plantimal." This time, from Blackhawk 199 (1964), we get the mildly annoying danger of the "Mummy Insects"! 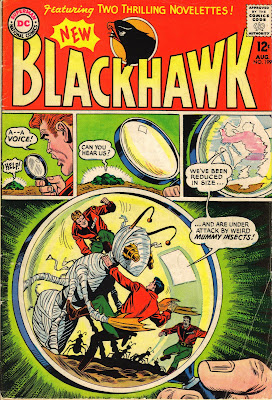 Clearly, the way Blackhawk writers would create a threat for the team would be to combine two vaguely interesting things and turn them into one slightly more interesting thing--in this case, mummies and ants. 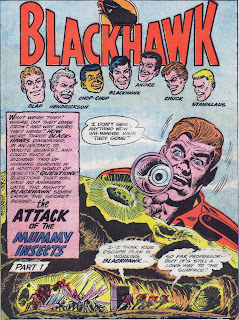 The story opens with citizens in some unnamed city's park suddenly finding themselves overcome by a strange green gas. Then, a similar gray smog blinds drivers on a local bridge. One's first thought might be that Hendrickson has been cooking again, but this is not that simple. Nonetheless, the local authorities call in the Blackhawks for help.

I have to stop here for a second because I have a question: Where exactly do the Blackhawks show up on local emergency services' speed dials? I mean, who has to be unavailable before you call the Blackhawks? At this time, you would have had the Justice League, Teen Titans, Doom Patrol, Challengers of the Unknown, Sea Devils, The Secret Six, The Inferior Five (am I missing any here?)--how far down that list do you go before you settle on the Blackhawks? And at what point do you just say, "Fuck it, we'll handle it ourselves"? I'm especially curious about that in this case, because I'm not quite sure that a team of aviators would be all that useful in dealing with mysterious gases that come out in city parks.

Whatever the case, the threat soon enters the Blackhawks' wheelhouse, as the city is threatened by a giant dragon fly. The team manages to shoot the creature down, but not before it punctures Andre's fuel tank and causes him to screw the pooch.

At the corpse of the giant dragon fly, the Blackhawks meet up with Professor Marley, a famous insectologist (is that even a real thing?) and natty dresser who has been studying some recent, strange insect phenomena. He shows the men how horseflies are committing suicide by the thousands, and black ants are attacking red ants. Marley reveals that one thing ties all these mysterious occurences together: the appearance of some strange, unidentified insect tracks.

The team helps the professor put together some surveillance equipment, which quickly reveal the culprit to be mummy insects.

Faster than Blackhawk can say "Galloping Ladybugs!" (which is the stupidest fucking expression I have ever heard. I mean, do ladybugs actually gallop?) the professor disappears in a puff of smoke before he can explain what the hell is going on with these crazy-ass ants.

The team splits up to investigate this problem, and Olaf, Andre, and Blackhawk come across a giant anthill with a glowing green meteor on top. They then call in the other four members, but when Chuck, Hendrickson, Stan, and Chop-Chop arrive, their teammates are nowhere to be found. All four members then pull out their handy Blackhawk magnifying glasses from their special detective kits, and find that their missing teammates have been shrunk down to the size of ants! 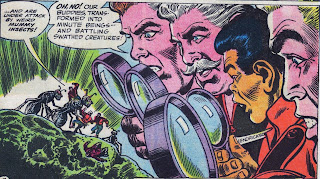 The four magnifying glasses trained on our heroes cause them to burst into flames and die, leaving only four surviving Blackhawks.

Actually, that's not true. But the mummy insects, who communicate through mental telepathy, take their three Blackhawks prisoner into the caverns of their anthill.

It turns out these aren't really Earth ants, but alien creatures from the planeT "Anteos," who have consumed all of their own natural resources and are now searching for a new planet to waste. The Blackhawks, however, inform the alien ants that we're doing a good enough job consuming all our resources, and we really don't need another species to do it for us.

The ants have wrapped themselves in bandages in order to protect themselves from damaging solar rays, and now they are using their science to cause Earth's insects to destroy each other, so as to reduce competition for valuable vegetation. Their plans aren't working fast enough, however, and the ants have kidnapped Professor Morley to get him to reveal the formula for an insect-killing poison that will finish off the job. Morley refuses, so he and the Blackhawks are thrown into the prison of this alien ant farm.

The Blackhawks and the professor develop an elaborate escape plan: they will convince the alien ants to don some winged contraption that makes them appear to be worker ants, which will drive some imprisoned red ants nuts, as worker ants are the natural enemies of red ants. The ensuing melee will create a distraction for the humans to escape. Actually, the professor comes up with this escape plan on his own, while the Blackhawks do absolutely nothing.

The escape, however, is blocked by alien ant guards, but Andre quickly mounts a firefly in order to get help from his full-sized buddies. They have a simple plan to destroy the alien ants and their secret laboratory: the tiny Blackhawks will take a bullet and a key, and they will bang the cartridge with the key until the bullet goes off. 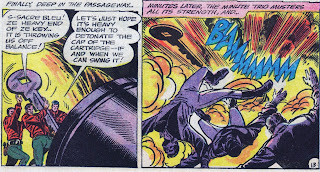 This works, and the alien ant genocide ensues, but the three tiny Blackhawks are still small. Luckily, just before Blackhawk killed him, the ant guard was nice enough to explain how the shrinking ray worked, and Blackhawk is able to return his teammates and the professor to normal size.

This is one of the first Blackhawk comics I ever owned when I was a kid, and for some reason that I can't quite explain, it got me hooked on the series to the point where I became an avid collector. In hindsight, that just seems ridiculous, and I really have to question the taste of 10-year-old Dr. K.
Posted by Dr. K at 5:34 PM