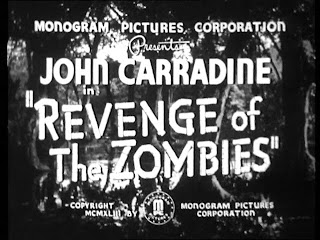 Mongram Pictures' Revenge of the Zombies (1943) is an ostensible sequel to the same company's King of the Zombies (1941), with the same writer and the return of Mantan Moreland as Jeff, the comic relief valet. However, the setting has shifted from a Caribbean island to the swamps of Louisiana. Moreland also has far less to do in this movie than he did two years prior.

For some reason that doesn't get clearly explained, Scott and Larry decide to switch identities when they get to von Altermann's estate. There, they quickly discover that something isn't kosher about Lila's death, as they see her walking around the house. Von Altermann, it turns out, is making an army of zombies for the Nazis, and Lila is his first experiment. The doctor, however, does a shitty job hiding his plan, and Larry and Scott do an equally crappy job hiding their suspicions. Nonetheless, Larry and Scott make the stupid mistake of drinking some of the doctor's zombie drug during dinner, and they find themselves in a jam.

Meanwhile, Jeff, the driver for Scott and Larry, has a comic subplot involving a disappearing corpse with a tatooed arm, but otherwise, he doesn't have much to do. To the film's credit, Moreland doesn't have to carry the film on his own like he did the last one, as the other actors are able to hold their own. Lowery plays a wisecracking detective who trades quips with Moreland, and Carradine does the thing he does best as the villain.

In one of the film's more confusing plot elements, Bob Steele plays an American agent who pretends to be a Nazi pretending to be the local sheriff. It seems that the character simply and conveniently switches allegiances in order to move the plot forward.

However, we do find that von Altermann's zombie drug does have one cure: coffee! What ills doesn't coffee cure?

In the end, von Altermann discovers that he cannot control the zombies as well as he thought, and Lila actually takes control of the other zombies, turning them on the evil doctor. The film has a particularly effective finale, with Lila dragging her husband down into the swamp.
Posted by Dr. K at 8:12 PM

with Lila dragging her husband down into the swamp.

That's a woman for ya though, amiright guys? Guys?

*glances over his shoulder*