One of the things I love about DC's Showcase Presents volumes that reprint their mystery and horror stories is how good a lot of the art looks in black and white. This is especially true for the stories drawn by the great Alex Toth, whose heavy line, minimalist style really shines without color.

And these series like House of Mystery and House of Secrets get a bad rap for being watered down by the Comics Code, but occasionally a genuinely creepy story snuck through, which is the case with "Turner's Treasure" from House of Mystery 184 (Jan.-Feb. 1970; reprinted in Showcase Presents: House of Mystery vol. 1), written by Jack Oleck and drawn by Toth. 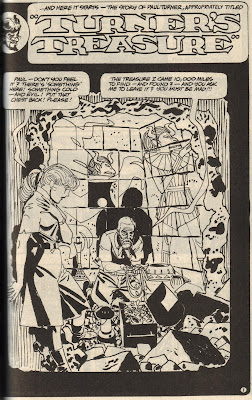 The story itself is not terribly out of the ordinary for the DC mystery titles. A college Philosophy professor, Paul Turner, has discovered clues that could lead him to a secret Egyptian treasure. He quits his job, possibly because conducting an archaeological expedition will not get him tenure in the Philosophy department. Also, he realizes that spending the last 20 years lecturing to students has been a waste of his life, which just makes me sad.

Turner takes his wife with him on the expedition, and he quickly discovers the secret treasure. 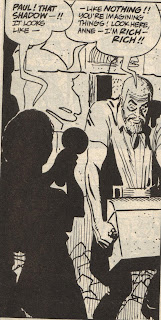 This panel in particular demonstrates Toth's skill with shadow and light, so while the dialogue may be cliched, the image itself is effectively creepy.

The treasure, of course, turns out to be cursed, and some Egyptian demon possesses Paul and forces him to kill his wife, which, despite the fact that it occurs off-panel, is a surprisingly disturbing turn for this story.

Paul proceeds to try and sell his treasure, but the demon manages to kill every person that comes in contact with it, including, in the end, Paul.

Throughout much of the story, Toth uses wide, horizontal panels that stretch across the page in a way that may be common in contemporary "widescreen" comics but seemed to stand out at the time.

It's in a panel like this where you can really see Toth's influence on artists like Jordi Bernet and Eduardo Risso.

Toward the end of the story, as the police are closing in on Paul, Toth gives us this nice four-panel sequence that serves as a textbook example for how to build suspense on the comic page.

Throughout this Halloween Countdown, I'm going to feature some of my favorite artists from these Showcase Presents collections and highlight some real gems hidden therein.
Posted by Dr. K at 5:31 PM

Yeah, all too often, the coloring in the original issues wasn't very good -- tended to bleed all over the place. The black-and-white reprints really do wonders for a lot of the old art. :-)