One thing I enjoy about watching old B-horror films is coming across the occasional movie that exceeds or challenges my expectations. It's not necessary that the movie be astronomically better than I expected, though that does happen occasionally, but that it does something that is just different enough to pique my interest.

That's the case with King of the Zombies (1941), a super-low budget horror movie from Monogram Pictures. 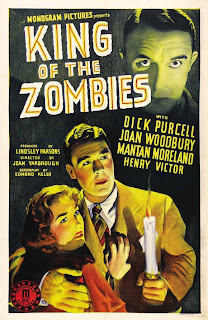 At best, the film should be a programmatic early zombie film, complete with the cultural insensitivity that goes along with the representation of voodoo. And the fact that the film is also a vehicle for legendary, popular African American comedian Mantan Moreland, one couldn't expect more than a hot racist mess. However, there is something else going on in this film that makes it difficult to dismiss in this manner.

As the film opens, we see pilot Mac (Dick Purcell), government agent Bill (John Archer), and Bill's valet, Jeff (Moreland) on a plane, flying near Cuba in search of a missing admiral, whose plane went down in the area days before. Experiencing rough weather and mechanical troubles, they put the plane down on a nearby island, from which they've heard a radio transmission in some unknown language. They find the island occupied by a mysterious Dr. Sangre and the natives in his employ. In a plot that anticipates I Walked with a Zombie, Sangre's wife is in a strange catatonic state.

When Bill and Mac are shown to their room, Sangre explains to Jeff that he must board with the servants, otherwise it would send the wrong message. This is where the film begins to take its interesting turn, as Jeff resists segregation and asserts his proper place upstairs. He doesn't win, but at least the movie does make the inequality problematic.

King of the Zombies feels like two movies are happening in it simultaneously: a horror movie and a comedy. In fact, Moreland appears to be acting in a completely different movie from the other actors. He will make jokes and do his shtick while Purcell and Archer don't even react. This gives the film a disconnected feeling as the tone can shift wildly in a single dialogue exchange.

While he's staying downstairs with the other servants, Jeff sees the zombies firsthand, as the servants in the house are charged with caring for the zombies. However, none of the others believe him, accusing him of being drunk or hallucinating. Soon, though, the evidence becomes overwhelming for Mac and Bill, and they start to believe Jeff.

Jeff moves freely between both worlds in the house's race/class divide, which also means that he can move between the physical and the metaphysical realms. The household servants speak freely with him, while they deny the existence of the supernatural to the others. Later in the movie, Sangre even hypnotizes Jeff into believing that he is a zombie, and for a short time he becomes a sort of leader of the zombie army.

Soon, we discover that Sangre is making zombies for the Nazis, which sounds much more awesome than depicted in the film. He's also using some combination of voodoo and hypnosis to get military secrets from the captive admiral by tranferring the admiral's knowledge into the mind of Sangre's assistant, then hypnotising her to reveal it, but this part really doesn't make sense. Also, while investigating the island's mystery, Mac is transformed into a zombie, though Purcell barely has to change his stiff acting style for this transformation. By the end of the film, Mac has suffered some serious abuse--two concussions, zombification, and several bullet wounds--yet he manages to survive. 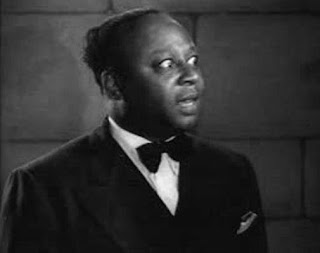 The film is worth seeing primarily for Mantan Moreland. It's by no means a progressive performance, but the challenge he presents to the island's racial inequality might come as a surprise to any modern viewer expecting a straightforward racist caricature. And the film structures so much of the mystery around Jeff's discoveries, while the other actors get very little to do (thankfully, as their performances are pretty lackluster). At the very least, the film is less easy to dismiss than the programmatic B-movie it's intended to be.
Posted by Dr. K at 1:09 PM