Halloween Countdown Day 15: Dracula Has Risen from the Grave!

As a crossover between the Halloween Countdown and The ISB's Dracula Week, today I'm going to cover Hammer Films' Dracula Has Risen from the Grave (1969) Dracula Has Risen from the Grave is Hammer's third Dracula movie, following The Blood of Dracula (1957) and Dracula: Prince of Darkness (1966) (The Brides of Dracula [1960] is not technically a Dracula movie because he never actually appears in the movie, though Peter Cushing does reprise his roll as Van Helsing). Blood of Dracula is a relatively loose adaptation of Stoker's novel, while Dracula: Prince of Darkness spends a huge chunk of its running time with Dracula's resurrection. In this third outing, Hammer's formula for these Dracula movies becomes set: Dracula threatens a woman and is then challenged by her lover.

Many of these Hammer vampire movies also begin with an effectively suspenseful opening scene that builds toward a horrifying reveal. In this case, a young mute boy arrives at the local church for his job as caretaker. As he goes about his rounds, he grabs the bell rope and finds it covered in dripping blood. The priest arrives and investigates the mystery that the mute boy can't explain, and he finds a dead woman hanging upsidedown inside the bell. The woman has two distinct bite marks on her neck, which leads the priest to cry out, "When will we be free of his evil?"

This scene works great on its own, but as the film progresses, it becomes clear that the scene has no real place in the movie. As we find out shortly, Dracula has not yet returned; in fact, he is still encased in ice as he was left at the end of the last movie (which is, by the way, one of the worst methods for disposing of Dracula. All you need is a good thaw and Dracula's free again.) So, this movie never explains how the girl got into the belltower in the first place.

However, after this incident, no one in the village goes to church anymore, and the priest is left to hold mass for an empty hall. It is here that Monsignor Mueller (Rpert Davies) comes to town--a man with experience dealing with vampires. Father Mueller decides to take care of the village's fears once and for all by climbing the mountain that overlooks the town and exorcising Dracula's castle.

Mueller and the village priest make their way up the mountain, but a combination of fear and exhaustion causes the priest to lag behind. Mueller successfully performs the exorcism, which seems to cause a thunderstorm to break out. The lightning causes the priest to fall, cut his head, and crack the ice surrounding Dracula (Christopher Lee) (this also puts the lie to the film's title, as Dracula does not actually rise from a grave. But then, "Dracula Breaks Free from his Icy Tomb" is not as catchy a title). The blood from the priest's headwound then runs down Dracula's mouth and revives him. So, Monsignor Mueller has only succeeded in locking Dracula out of his castle, though the Monsignor does not know this yet and instead returns to his own village, comfortable in the knowledge that Dracula has been defeated once and for all.

Dracula finds that he can no longer enter his castle, so he vows revenge on the one that did this. To track down Mueller, Dracula takes control of the village priest, who then leads the vampire to his prey.

Meanwhile, Mueller returns home to his sister and niece. Maria, the niece, is nervous to introduce her uncle to her new beau, Paul, whose shirtless introduction makes him look like a buff, 19th-century version of Roger Daltry. During their introductory dinner, Paul reveals to the Monsignor that he is an atheist, which, as you can imagine, doesn't sit well with the holy man.

One of the major flaws in these more formulaic Hammer movies is the fact that nothing much happens in the second acts. So, while the movies are only about 90 minutes long, they tend to drag in the middle 30 minutes or so.

Paul works at the local bar while he also studies for some undefined degree. A co-worker at the bar--a saucy redhead named Zena--is always hitting on Paul, but he remains true to Maria. We know, however, that the redhead is obviously going to come under the thrall of Dracula, and this proves true soon enough.

Dracula, now accompanied by both Zena and the cowardly priest, seeks to take revenge on the Monsignor through his niece, and this brings Paul into the fight as well, and his atheism becomes an obstacle for defeating Dracula.

In fact, the movie makes a weird addition to the rules for destroying vampires--not only is a stake through the heart necessary, but the "staker" must also pray while doing so. This is actually closer to the rules established in Stoker's novel, but it's highly inconsistent with the other Hammer vampire movies, and it seems to be here only to present a challenge for Paul.

The director of this film, Freddie Francis, was one of the greatest cinematographers in film history, and he got the chance to direct at Hammer. As such, his films for Hammer have a distinctive visual style. Here, Dracula is always shot through an odd, prismatic filter that gives a rainbow hue around the edges of the frame while making Dracula's skin look unearthly in the center. He also uses a lot of closeups of Dracula's bloodshot eyes, and Dracula has almost no lines in the movie.

This movie also makes up for the weak ending of Prince of Darkness by giving Dracula one of the most awesome, most visually exciting deaths in the Hammer films. You can see it here if you don't mind the spoilers:

Also, as an added bonus, here's one of the posters for Dracula Has Risen from the Grave, which serves as a perfect marketing strategy for what Hammer was trying to do with this series. 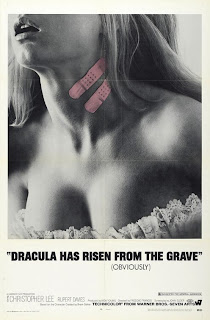 This film was followed by Taste the Blood of Dracula, and that title reflects the increasing luridness of Hammer's Dracula films.
Posted by Dr. K at 10:00 AM

I would totally see a movie called "Dracula Breaks Free From his Icy Tomb!"

Brides is still my favorite Hammer film period. Despite the Lee deficiency, it pretty much sums up everything I like about Hammer. The wild style, dream logic, hallucinogenic imagery, and deep layers of perversion and kink darkly inferred just underneath the surface.

I wish they could make a movie called "Dracula Breaks Free From His Icy Tomb!" But unfortunately, I think that was already the Japanese title of "Cool Runnings."

Man oh man is that second poster one of my favorite horror movie posters of all time. Gets Hammer just right.

From one Dr. K to another, great blog, so happy to find it! Halloween is Hammer time!

I know this is an old post, and my comment beleated, but I was just reading through some past entries.

Great review of one of my favorite Drac films (the first I ever saw, as a kid). I wanted to clear up a plot point you mentioned, though: the opening scene, which you felt was out of place, was identified as happening before Dracula was dispached in the previous film... a flashback to when Dracula was alive. The rest of the film takes place after he has been dead for a time, but the townspeople are still afraid, and the church has become abandoned by the people, and the priest lost his faith.