Last week, I promised that Blackhawk Wingsdays would be tied into the Halloween Countdown for the month of October, so for this installment, I picked a Blackhawk story that recalls some of the sci-fi movies of the 50s and 60s. So, here's the main story from Blackhawk 218 (March 1966): "Seven Against Planet Peril," featuring the menace of "The Plantimal!" 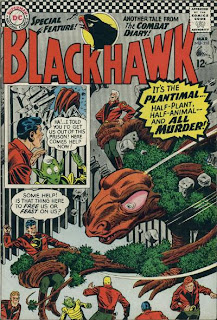 As the cover states, The Plantimal is "Half-Plant, Half-Animal--and All Murder!" But I really feel like I need to see the math on that equation.

Though no writer is credited on this issue, this is the point in the series where Bob Haney has taken over scripting from Arnold Drake and France Herron, and he initiated some key changes to the series, including new costumes and more sci-fi-style adventures. So, although Bob Haney is not credited as the writer of this story, I'm pretty certain he did it, as will become apparent soon enough. And, as usual, the art is by Dick Dillin and Chuck Cuidera. Dillin definitely seems to be cutting loose under Haney's scripts and perhaps under the influence of DC's other Silver Age artists, and we are getting to see a style here closer to the one he used on his classic run of JLA. 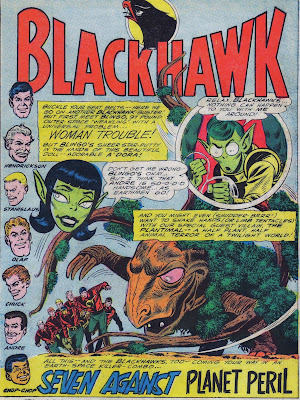 The story opens with the Blackhawks flying to their very special, isolated vacation retreat. Suddenly, all the buildings in the vacation village fly up in the air, and the Blackhawks have to perform a crazy aerial maneuver that couldn't possibly happen, where they link the planes' rope ladders into a kind of lasso. 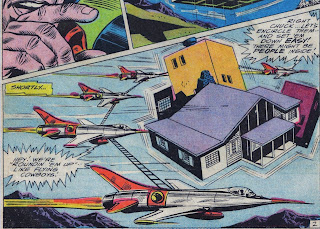 It turns out that, stowing away in one of these deserted buildings is none other than "King Blingo," the rightful leader of the planet Ezz, who is hiding out on Earth in exile. 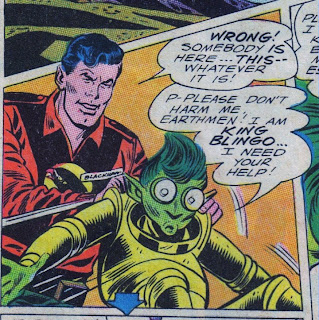 Blingo blames some invisible "Image-Men" for the flying buildings, and then he tries to enlist the help of the Blackhawks to return him to his rightful throne on Ezz.

The Blackhawks and Blingo try to infiltrate the Ezz palace, but they set off an alarm that leads some guards to them. 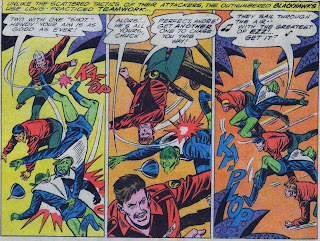 But they use some awesome teamwork and horrible puns to beat these Ezzians into submission.

However, the leader of the insurrection, General B'Adda, uses an "immobile ray" on the heroes, and they are thrown in prison.

While in prison, the Blackhawks meet A'Dora, the woman who Blingo had hoped to make his queen. A'Dora, however, is a stone-cold bitch. 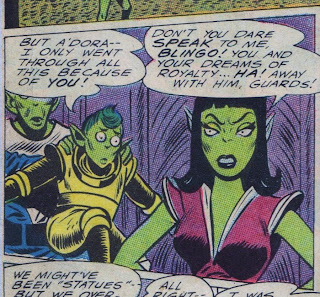 In the cell, the Blackhawks fear that none of their skills can help them escape, at which point Blingo starts whistling, and a terrible noise comes from outside. This turns out to be the "Plantimal," which totally confounds the Blackhawks' rather rigid sensibilities about life forms. 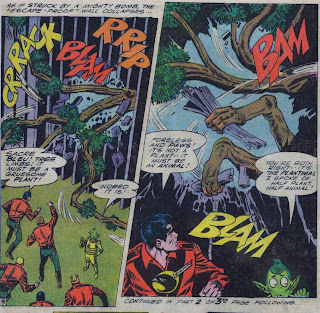 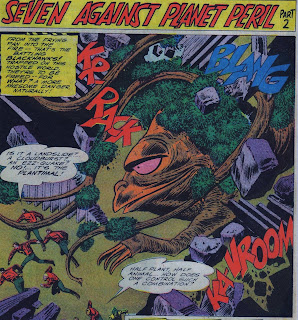 In fact, they get into a detailed discussion of whether they should water or feed it, put it in a pot or leash it, cook it or eat it raw, or make a baseball bat or a fur coat out of it.

In the end, the Plantimal is not defeated by the Blackhawks' various skills, whatever those might be, but instead by Blingo's newfound superpowers, which include flight and incredible strength. 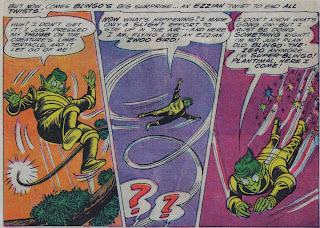 It's at this point that I have little doubt that Bob Haney wrote this story. Nothing from here on out makes any sense, and a lot of it seems made up on the fly.

Somehow, Blingo and the Blackhawks figure out that he got his powers from some mineral water near the mountain retreat on Earth. Meanwhile, B'Adda kidnaps A'Dora, who is hot for Blingo now that he has super powers. They head to Earth in a rocketship, while Blingo uses his as-yet undefined powers to create a "Super-Air Bubble" around the Blackhawks and carries them to Earth. 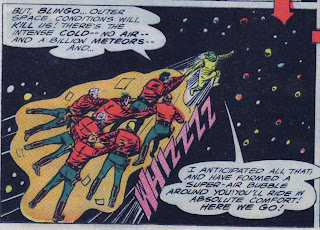 On Earth, the Ezzians try to gain superpowers through the mineral water, but it doesn't work, and they instead try to take out the Blackhawks with three different weapons: an atomizer gun, a demolisher ray, and a vaporizer gun.

We never get to see if these weapons will work, though, because Blingo uses his antigravity weapon and drops a house on them.

In the end, Blingo gets to reclaim his throne, but he doesn't quite get the girl, as A'Dora--like all women throughout the universe--succumbs to Andre's undeniable attraction.

Andre, interestingly, does not take the opportunity for some green Ezzian strange, so A'Dora decides it's best to hook back up with the king.
Posted by Dr. K at 2:09 PM