On the first day of the Halloween Countdown, I posted a picture of my brother and me in our Ben Cooper Frankenstein and Batman costumes (respectively) from Halloween 1977. This picture reminded me of the other Ben Cooper costumes I wore for Halloween in the years that followed, so I set off on an image search to see if I could find pictures of them.

In both 1978 and 1979, I went as Buck Rogers for Halloween, though I had two different costumes each year. In 1979, I dressed as the Gil Gerard version of Buck Rogers from the NBC series that debuted just a couple of months before Halloween. 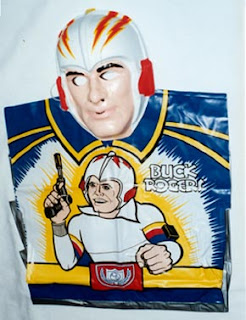 (Image from the Geek Orthodox blog, which did a great gallery of vintage Halloween costumes for last year's countdown.)

However, in 1978, before the new Buck Rogers show had aired, I also went as Buck for Halloween, this time in a costume based on the old comic strip. 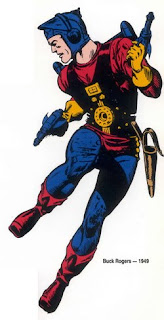 I also made an awesome jetpack for this costume, spray-painted silver and complete with elastic bands that crossed my chest in the front. I also had a wooden laser gun that my dad made. Unfortunately, at this point in my childhood, there was a serious decline in picture-taking, so no known photos of my costume exist, nor do I have pictures of me in the 1979 costume. Also, I can't seem to find any pictures of the vintage costume through an image search.

In thinking back, this was an odd choice for a costume, in that Buck Rogers had no real pop culture currency at the time other than nostalgia, so most of my 4th grade classmates probably thought I was some generic spaceman. But I can also see in it the seeds of my own emerging geekdom. At that time, I owned some records with episodes from the Old Time Radio Buck Rogers series. I had also discovered, in the attic of an old house, some old Sunday funnies sections from the 1950s, and I became fascinated with the few Buck Rogers scripts I read there. The advent of Star Wars the year before also created a classic sci-fi revival, and both Flash Gordon and Buck Rogers were the beneficiaries of that renewed interest. So, I definitely had access to information about old comic strip characters even with the limited media access I had at the age of 9.

And if anyone has seen images of the old-school Buck Rogers costume I described above, please pass them along.
Posted by Dr. K at 1:06 PM

Is this still active? Because I have a photo of a friend wearing this costume.