Halloween Countdown Day 19: I Married a Monster from Outer Space!

As I mentioned in a previous Halloween Countdown post, I love discovering an old sci-fi or horror movie that has more going on in it than one might expect. The best example, and one that I occasionally use in some of my classes, is the original Invasion of the Body Snatchers, which is well-known for its Cold War subtext. Another similar movie, but with an altogether different 1950s subtext, is I Married a Monster from Outer Space (1958). 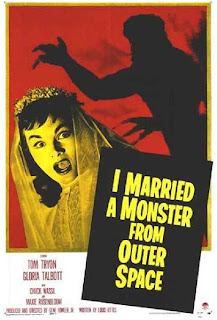 I Married a Monster from Outer Space (directed by Gene Fowler, Jr., perhaps best known for another confessionally titled classic, I Was a Teenage Werewolf) could be, and often is, read in the same Cold War context as Invasion of the Body Snatchers: the replacement of humans by aliens is a metaphor for the Communist infiltration of the US. Both films build on a similar sense of dread that no one can be trusted, and both are set in stereotypical small town America. However, the anxieties exploited in I Married a Monster are much more domestic in nature.

The film opens with what must be the most depressing bachelor party in history: a bunch of guys sitting around in a bar, getting drunk, and complaining about how rotten marriage is. Bill, the groom-to-be (Tom Tryon), decides to leave this yuck fest and head home. But on his way, he's accosted by a strange, glowing smoke that envelopes his body, and he is replaced by an alien lookalike.

The next day, Alien Bill goes through with his marriage to Marge (Gloria Talbott), and it's clear on the wedding night that the couple is experiencing some considerable sexual tension. The film then cuts to Marge writing a letter to her mother, in which she complains about Bill's lack of intimacy, and how he seems to be a different person. However, she throws the letter away without sending it.

The movie flashes forward a year at this point, and Marge is visiting her doctor because she's worried that she and Bill are still childless. The doctor explains that there is nothing wrong with her, but he would like to see Bill at some point.

It is here, in Marge's anxieties about childlessness and her concerns about Bill's lack of intimacy, that the film's subtext begins to become apparent. The replacement of men by aliens serves as an allegory for 1950s anxieties about homosexuality, and this allegory plays out in very interesting and surprisingly frank ways throughout the movie.

Soon, Bill discovers that he's not alone in Morrisville, as his friend Sam reveals that he, too, is an alien, though he has to do it through coded language and some kind of psychic connection. Then, more and more men in Morrisville are replaced, including local police and other authorities.

Marge continues to suspect that something's wrong with Bill, and when he sneaks out one night, she decides to follow him. She trails him all the way to a local wooded park, where he meets other men from the town, and she is finally exposed to his true nature.

She then tries to share her knowledge with others, but they don't believe her. The sheriff, for one, is an alien himself, so he won't help. When she tries to warn her friend Helen away from marrying Sam, Marge can't find the language to explain her objections, and all Helen can think of that would dissuade her would be if Sam were a bigamist or a bank robber.

Ultimately, the aliens' plans are revealed. On their home planet, all the women died as their sun became extinct, and they are looking for another planet through which they can allow their race to survive. Their scientists are currently working on ways to breed with human women, and once that happens, they can perpetuate themselves.

However, a couple of problems have come up. First, some of the alien men are starting to feel human emotions, as they absorbed the memories of their victims. Second, the aliens can't survive in Earth's atmosphere, so their human meat suits convert oxygen into whatever it is they breathe. And third, they can't consume alcohol, which, as you can imagine, makes them stick out like crazy in 1958.

Marge finally gets the local doctor to believe her story, and the doctor gathers together all the men who have recently fathered children (and therefore couldn't possibly be aliens) to form an armed posse to go after the alien spaceship hidden in the woods. So, the finale of the film basically pits all the certified heterosexual men in the town against the gay aliens. The aliens then decide to leave Earth alone, and the human captives are recovered, so now Marge and Bill can get married for real and start procreating, instead of doing whatever freaky alien sex stuff Marge was doing with her alien husband. Interestingly, we don't see the conversation that Marge and Bill have about what Marge was doing for the year that Bill was an alien prisoner.
Posted by Dr. K at 2:06 PM

Labels: Halloween Countdown, I Married a Monster from Outer Space

I can just imagine the fights between Bill and Marge in th eyears to come: 'You're not half the man your alien double was!"