Every year, I teach Beowulf in the British Survey course. And almost every year, I teach Bram Stoker's novel, Dracula, in First-Year English. As I have been tenured for a few years now, I've been looking for ways to make my teaching more efficient and less strenuous. One way I would really like to do this is to combine some of the works I teach and "double-up" so I don't have to do so much reading. That's why I was very excited when I found this comic: 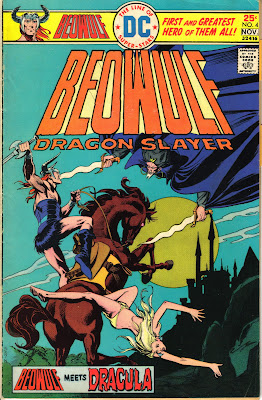 Beowulf 4 (Oct.-Nov. 1975), written by Michael Uslan and drawn by Ricardo Villamonte, has the great Geat hero, Beowulf, fight the Wallachian prince, Vlad Tepes, also known as Dracula. More specifically, Beowulf teams up with the lost tribe of Israel to fight Dracula, which is a plot more awesome in the paraphrasing than it is in the execution.

Satan, who has been screwing with Beowulf and his band of warriors since the beginning of the series, keeps transporting Beowulf back and forth between the battle with Grendel, which is based on the original epic poem, and other conflicts all over the world. In this issue, Satan pits Beowulf against Vlad and his Wallachian army.

But first, Beowulf is attacked by the lost tribe of Israel, who think the guy in the outrageous pointed helmet is Dracula himself. Once this confusion is settled, the wandering Jews explain to Beowulf the story of their enemy, who is known as both the "Son of the Dragon" and "The Impaler". 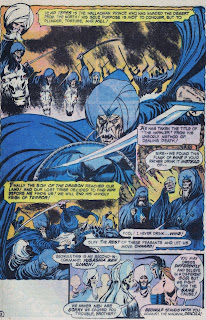 Uslan manages to hamfistedly insert a line from the 1931 Dracula film here, even though it really doesn't belong.

After Beowulf gets transported back and forth to different locations, he finally has a showdown with Vlad, pitting his giant freaking mace against Vlad's flimsy shield and tiny spear.

Vlad then disarms Beowulf and pulls out a giant sword from somewhere, moving in for the kill. 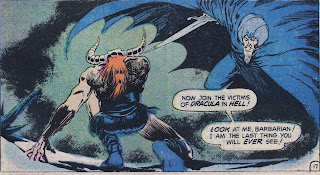 However, in a surprising turn of events, one of Vlad's own men stabs his leader in the back, killing him and saving Beowulf. As we see, the Wallachian soldier was momentarily possessed by Satan, who decided he needed to use Dracula for bigger plans, thus transforming him into an undead vampire.

So, Dracula doesn't even become a vampire until the end of the story, making this slightly useless as a replacement for the two separate literary texts that I teach. And, in the end, it doesn't get close to living up to the potential for awesomeness that a Beowulf/Dracula fight should achieve. Therefore, I think this concept deserves a do-over.
Posted by Dr. K at 10:42 PM

I liked this one a bit better, but then again I'm not teaching anybody anything, either...

I'm glad you liked your own three-year-old post better than mine, Johnny Bacardi.

Beg pardon- I left out a word. I meant to say I liked that particular ISSUE better than you did. My bad!